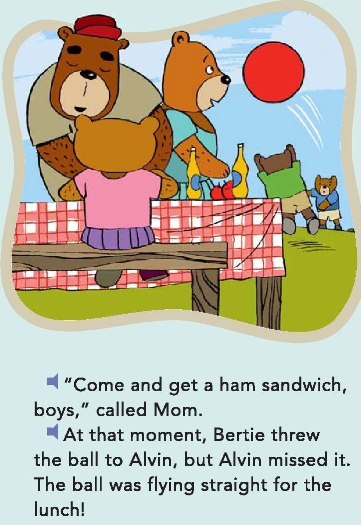 Functionally they are the same. They mean the same thing.
They both mean that the ball is flying in the direction of the lunch and it suggests that the ball will hit the lunch.

I would have chosen to use the word "towards". So,

The ball was flying straight towards the lunch.

I think a meaningful difference could be made if it was not a ball, but a person or an animal. For example, let's say it was a bird, for a literal sense:

To "head for" something is to head towards it. Also, to "make for" something has the same meaning. This is an idiomatic use of for over to. Both "head for" and "make for" have the implied meaning of the subject having the intention of getting to whatever it is "heading for." That implication wouldn't be there if we used to instead.

So, there's an slight implication in "flying for" that the ball has the intention of hitting the lunch, as if the ball had a bit of a mind of its own, and its mind was set on crashing into the lunch.

The use of the word lunch in the examples provided sounds unusual. Lunch is a mealtime, or the food consumed at the mealtime, but isn't usually referred to as such. For example, the sandwich, chips and drink of which a 'lunch' might consist, are only 'lunch' if they are being consumed for the mid-day meal. They are still food, and might be eaten later for 'dinner' instead...

Also, the verb 'flying' in these examples also sounds a bit unusual. A ball might be flying through the air, but aside from that example, I have a hard time imagining the use. One might instead use: The ball was (streaking toward | headed for | headed toward | destined to hit | arcing toward) the lunch.

All that being said, in answer to your question, they are both equally correct and awkward.

One might instead say "The ball was headed straight for the cup of soda" or "The ball was arcing directly toward the sandwich." These sound more natural to me, a native speaker of US English.