What is the meaning of “grains originate from active jets that spray”?

The vast majority of the sampled grains originate from active jets that spray from the surface of Saturn's geologically active moon Enceladus.

If I say, The apples that detach from the tree. It means that apple gets detached from the tree.So here, the above sentence should mean that active jets that get sprayed from the surface of Enceladus. Am I right?

At a sprawling fenced complex on the Aegean island of Lesbos, adults and children broke down in tears before the head of the Roman Catholic, after their onward journey to Europe was cut short by an EU decision to block a migrant route used by a million people fleeing conflict since early 2015.

Since sprawling and fenced both are adjectives, shouldn't they be separated by a comma?

if it is understood that you are talking with respect to trees, or

though 4. sounds strange to me.

Let us examine a definition of jet.

jet
a (1) : a usually forceful stream of fluid (as water or gas) discharged from a narrow opening or a nozzle
(2) : a narrow stream of material (as plasma) emanating or appearing to emanate from a celestial object (as a radio galaxy)

Let us look at an image of some jets. 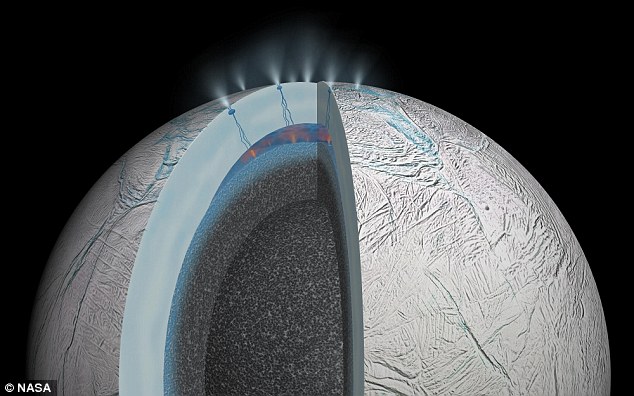 spray
: to project spray or something resembling spray on or into

Other ways to understand spray in 5. are shoot, spout, originate. In other words, 5. is saying that the jets (the streams) originate/shoot from the surface of Saturn's moon "Enceladus". So, the jets are not "getting" spray, but instead they are escaping/shooting from the surface. If you meant something like "getting shot from the surface", then you had the right idea.

People bend and break the rules of grammar all the time. I don't know if the rule says you "must" put a comma there, or if you should put a comma if the meaning is ambiguous without it. I also remember it as "it should be there", but since the sentence is understandable (at least to native users) without the comma, then it really doesn't matter that the author broke the rule.

Not the answer you're looking for? Browse other questions tagged grammar verbs punctuation or ask your own question.

3
Meaning of “Radio your way”
0
What is the active voice of the given sentence?
0
The correct use of comma to distinguish determiner “that” from the conjunction
1
What is the grammar of the sentence like “Deleting a node z from ..” that usually accompanied with figures in textbook
0
Can the verb “sandwich” be used in an active voice?
0
Subject in Active voice
1
What is correct- 'starts from' or 'starts at' when we talk about the cost of something?
0
The second “that” could be removed from the clause?
0
Is the following active or passive?