What does it mean? "I can't people today"

There is a shirt with a sentence written on it. The sentence is :

What does it mean? I've seen this link and I know that "people" can be a verb but in this special case, I don't get the meaning of the phrase.

It's supposed to be funny.

I can't deal with people today.

I personally didn't find it funny because this structure

seems cliche to me. 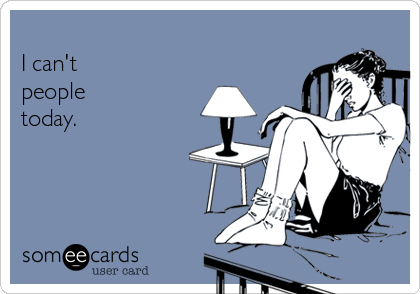 if you are familiar with that expression.

I felt like I should probably note that the structure (using nouns as verbs) can change meaning. It isn't fixed. But it is usually used to be funny. For example,

It could mean I can't do/comprehend/tolerate/teach math, all depending on context.

Today, before I went to class, I saw this post. I was exhausted and I really didn't plan anything for class. So I was thinking, I can't math today. In other words, I can't teach math today. (I wasn't trying to be funny; that's how I felt. But it could be used by someone else to be funny, like if they really hated math.)

Here is an instance of to [noun]. The speaker is talking about the abundance of tutorials in the game Pokemon LeafGreen

You get a tutorial battle where you are told how to play Pokemon. And then there is an old man later on who tells you how to Pokemon.

In this instance, we infer that "to Pokemon" means "to play [the game] Pokemon [LeafGreen]". He's trying to be funny/cutesy. He gets a couple of smiles, but no one really laughs out loud.

This isn't normal English. The person who wrote this is deliberately using weird grammar for fun.

This is something people do as a joke: using words as verbs even though they're not verbs. People also say things like "I forgot how to American" (meaning something like: I forgot how to act like an American) or "how do I piano" (how do I use a piano). You have to kind of guess the meaning of the 'verb'. It's deliberately not very clear.
What's meant here would be something like "I can't deal with people today".

The phrase is a strange and ungrammatical way to say "I don't want to have to do the things that people do every day, because I can't handle it."

This is an example of a relatively popular meme, all of which are variations on the so-called "Adulting" meme. The syntax of the phrase is deliberately bad English, which is intended to inject humor into the saying. But if you're not already very familiar with the intended meaning, the literal meaning just sounds wrong.

The original phrase, which your example is a derivative of, was "I can't adult today, please don't make me adult". The relies on the use of the noun "adult" as if it were a verb, and probably derives from the "adultingblog" Tumblr account. (Warning some NSFW language in some of the posts.) The blog author used the term "adulting" to mean "the process of being, or acting like, an adult", as if it were a job title. If we expand this concept to your example, we can see the pattern:

Note also the deliberate use of the plural "people" even though the speaker is a single person, again relying on improper grammar to inject humor.

Not the answer you're looking for? Browse other questions tagged phrase-meaning slang verbing .

0
meaning of the phrase
1
People as a verb, what does it mean?