in the face vs on the face; in a mobile vs on a mobile

To be honest, neither (1) nor (2) are particularly sound. A native would say:

A look of fear appeared on her face

But "rising fear", and certainly "rising fear [on a face]" is completely unidiomatic at least to my ears.

Consequently the answer is that neither (1) or (2) are satisfactory, (3) is completely wrong and (4) is the correct way to describe someone who are using their mobile phone to play games.

I'm going to offer an answer that's a little different from Matt's – not because Matt is wrong, but because it shows there are different ways to look at this.

I have no problem with (1) or (2). English offers several ways to describe how emotions can be seen in someone's face. Here are just a few; I could find examples of all of these on-line:

Some are common enough to be considered idiomatic, but all have precedent in published works.

Point #1: There's no single way to describe how someone's face might reveal an emotion.

Next there is the issue of in vs. on. When it comes to emotions, emotions can be read both in and on someone's face. Again, there is precedent for both:

Point #2: Prepositions are very versatile words that are flexible and sometimes have overlapping meanings.

As for (3) and (4), I echo Matt's thoughts: in is almost certainly not the right word to use (although the Tron-like scenario he's suggested shows that there's almost always a context where something that sounds wrong would be in fact acceptable). I did want to mention another preposition that could be used:

She is playing with a mobile phone.

This would mean that she has the phone in her hands, and is fiddling with it. This could refer to a toddler who is just picking it up and and pretending to talk: 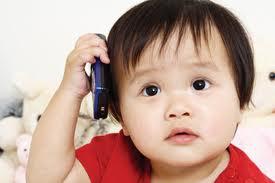 or, in a more casual sense, it could refer to a person in a store who is considering buying a phone:

Where's Belinda?
She is playing with a mobile phone, over in electronics. I think she wants to upgrade soon.

Words like play or run have several different meanings (the word play has 30 meanings listed in Collins, e.g. – and that's just as a verb), which makes it very difficult to say which preposition is "correct," because, absent further context, the sentence can mean several different things. What if I asked: What does "Mary had a little lamb" mean? That depends on the context. I could say either of these:

See how context changes the picture?

Point #3: Some verbs (like had, run, and play) have many diverse meanings, and the "right" preposition(s) will depend on how you are using the word.

1
difference between 'beneath' and 'under'
2
The nuance of using the word 'home' as an adverb/noun with or without prepositions
1
Popular among or with or between
1
I make ten phone calls (in) a day
0
Is “I play tennis for thirty minutes every Monday.” a correct sentence?
0
“in” or “on” the 3rd week of July
0
Outside her control
2
What is the function of “of” in “of her immortal sisters” and “that of Roy Bhaskar”?
0
to ask for vs to ask