“When is a virtual function not?” — I don't understand the phrasing

This is from a For Dummies series book. I don't think I understand the phrasing of this title. When is a virtual function not... not what? I presume this must be some kind of a pun.

A friend of mine, who is a native speaker from America, could only say that this reminded him of the joke "when is a door not a door", but he was not at all sure whether that was what the author was going for. 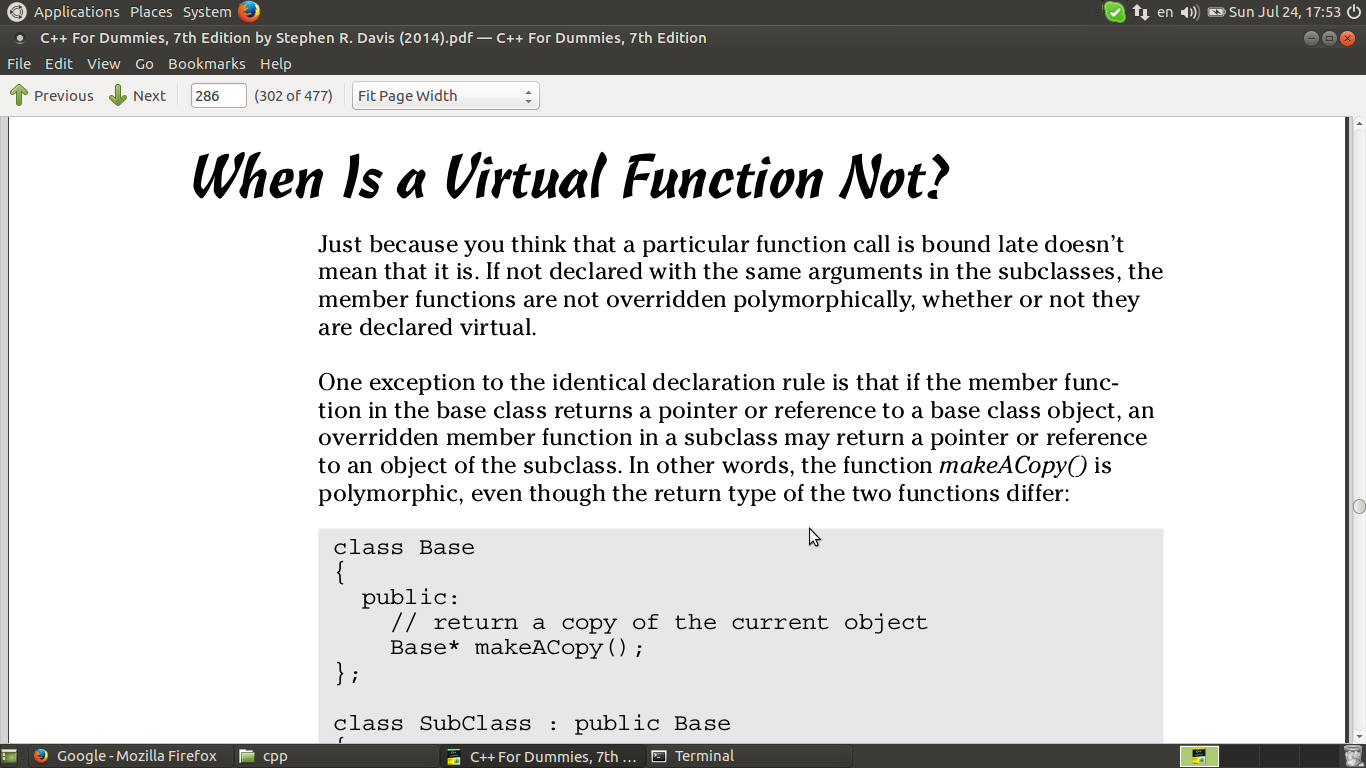 This play on words depends both upon the reader's acquaintance with the meaning of the phrase Virtual Function, and here upon the currency of that phrase in the jargon of a specialized audience. In English, as in most languages, humor (however mild it may be, as in this example) sometimes depends for its success upon eliciting surprise in, or confounding the expectation of, the reader: here an expected modifer in a well known phrase is omitted from the title sentence, and this comes as a (mild) surprise. If there were a term for this particular form of deletion, it might be predictive ellipsis,† or, taking a page from medical usage, phantom ellipsis.†

The article here describes functions which appear to be Virtual Functions, but which, upon analysis, are not. The modifier in the common phrase, Virtual, is deleted from the sentence as written, but the reader, expecting it to follow the negation, perceives the question as When is a Virtual Function Not (Virtual)?

The same device might be employed in precisely the same way in the title of an article about a substandard campground:

When is a Happy Camper Not?

Another example might be the title of an article which describes a particularly boring National Football League championship contest in the U.S:

Why Was The Super Bowl Not?

Note that this device will not be effective when the phrase employed has no "identity" of its own as a well known phrase, as in:

When is a Green Taxi Not?

† In the event that this form of deletion has no name, I will accept credit for either coinage. If, as I suspect, there is a term already in use, I do not doubt that it will be provided in commentary.

If written out in full, the title might be

If a part of a sentence is repeated later in the sentence, it can be omitted, as long as the meaning is still clear. This is called ellipsis or deletion.

Ellipsis can only be effective if the listener or reader can easily tell what has been omitted. For example:

He says that instant coffee tastes the same as expresso, but it doesn't.

We parse the sentence and realise something is missing: we understand what the speaker or writer wants to say, and can easily fill in taste the same.

In the example you provided, we realise that something is missing, but we don't understand what the writer is trying to say. We can guess, but even when we do that we don't understand, because we have not read the chapter that explains this. Even having read the chapter, there are at least two possibilities for what the omitted text should be: a virtual function, or virtual.

The writer is trying to grab our attention by using a headline that adds a bit of mystery to an otherwise dull subject: the technical term for this is a Teaser Headline.

The wording suggests that the title may also be intended as an oblique reference to a certain type of children's joke, and the use of ellipsis is supposed to add to the humorous effect. Here is a typical example of this type of joke:

When is a door not a door?
When it's ajar

The joke is not a good one, and the use of ellipsis is in this case confusing. Arguably, the headline is an effective teaser, but because of the levels of confusion that go into its construction, it may be more irritating than intriguing.