What is meaning of "down the pitch"?

The phrase "Back in" definition:For the non-striker to take a few steps down the pitch, in preparation to taking a run, just as the bowler bowls the ball.

The pitch is straight so how can one move down it? I've seen phrases like: down the throat, down the line , etc. but they are idiomatic. What the phrase means by down the pitch?

Also, the screen is popping an error with in preparation to. I think it is fine. In preparation to could be replaced by in preparation for without changing the meaning.The difference lies in the usage- British English or American. Am I right?

The cricket pitch is a very specific area of the cricket playing field, demarked by the wickets, it is about 20 metres long. The overall playing area is much larger, typically for professional games over 100m in diameter. 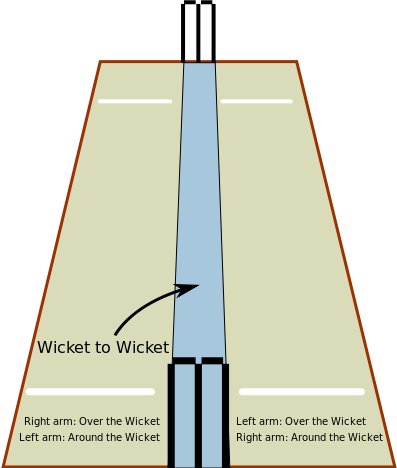 The complication comes from the fact that at any time two batsman are "in", one at each wicket (yes the bases are loaded). One batsman is inactive, standing adjacent to the wicket from where the bowler bowls. This is the non-striker, and the subject of the question. The other batsman is defending the other wicket and hoping to hit the ball so that a run can be scored - each batsman runs down the pitch to the opposite end from where each started, the batsmen exchange places. Both must make it to their respective objective wicket for the run to be scored.

Hence the non-striker has an incentive to steal his way a little bit along the pitch. He's not going to strike the ball, so he's free to move and save himself some running. For no obvious reason we refer to motion away from the starting position as down the pitch, rather than along the pitch.

[There is no direct equivalent of baseball's stealing a run, it is explicitly forbidden by the laws of cricket.]

"Pitch" is also a British term for the playing field itself, so "down the pitch" would simply mean the player is moving down the field.