Does 'Any number can be used' use the pattern SUBJ + vt + noun + dependent clause?

In Guide to Patterns and Usage in English by A. S. Hornby, it is said that VP 21 is

If so, can we say that the sentence

Any number can be used. 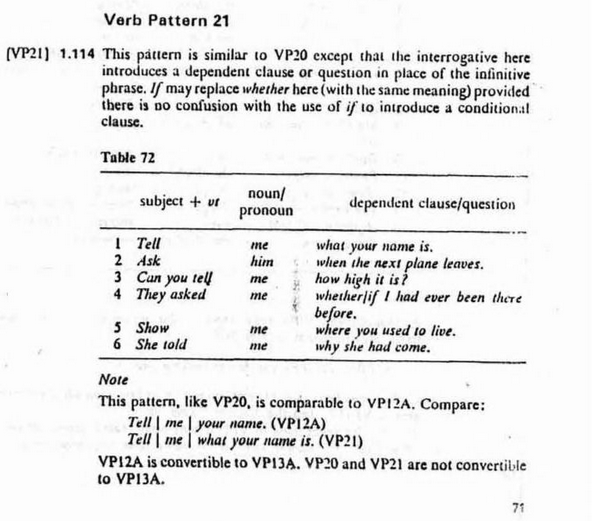 Any number can be used.

First of all, this sentence is ambiguous. We don't know if used is an adjective, as in

1 Any number can be used, as opposed to new.

or a past participle in a passive construction, as in either

2a Any number can be used [by you][to solve the equation].

2b Any number [of spiders] can be used [by you][to scare a young girl].

Neverthless, in any of the above constructions the sentence is not Verb Pattern 21 as shown by the image in the edited question. SegNerd has done a good job of showing why your sentence is not VP21.

Note that Hornby's text is meant for advanced students, so he expects you to know what a passive construction is. Apparently he also expects you to know how modals work, since he uses few example sentences that contain modal verbs among his 25 Verb Patterns. Instead, their use is explained in Chapter 5 of the text, and can is dealt with mostly in 5.34-5.38.

If used is an adjective, as in my sentence 1, it seems to be Verb Pattern 1, SUBJ + BE + subject complement/adjunct. (I haven't read the whole text, but Hornby only gives two patterns that use the verb to be.) The modal can here indicates ability or, less likely, permission.

The SUBJECT is any number, the verb is {CAN +} BE, and the complement/adjunct is used. If used is meant as an adjective (an antonym of new) then this is similar to all the sentences in Table 2 of VP1, which include It was dark, The children were exhausted, The ship is still afloat.

In a passive construction, Any number is the 'subject' of the sentence, with can be used as a sort of truncated passive predicate. A fuller predicate would be something like the one in my sentence above: used by you to scare young girls. Again, the text expects you to be familiar with passive constructions. If you are not, see ELU's How can I reliably and accurately identify the passive voice in writing or speech?

You can use can to ask questions:

Can you tell me how high it is?

which Hornby includes as an example of VP21 (see image), but can in your sentence is used to express ability, or informally, permission. See sections 5.34-5.38 of the book. And while this is a useful text, the 25 Verb Patterns that Hornby refers to are used by him alone (as far as I am aware); in addition, he first came up with these "Verb Patterns" in the first edition of this book, which was published in 1954--over sixty years ago. If this is the only grammar you have, it can be helpful. If you have access to others, you might want to give them a try. Especially if you are not an advanced student.

No, it does not follow the pattern. Probably the most obvious reason is that the pattern contains subject and another noun, so a phrase that follows that pattern has to have two nouns or pronouns. Your sentence has only one ("any number").

The sentence you provided is simply a basic passive voice sentence. A more direct (but less formal) way to say the same thing would be "You can use any number."

For it to match the pattern you are discussing, it would have to be something like "He asked which number was used."

If you said, "But numbers 1 and 2 in the table don't have any nouns in their subjects!" that is simply because they are in the command form (imperative), and commands in English have an "implied you." So they do have a noun. You just can't see it.

Not the answer you're looking for? Browse other questions tagged verbs or ask your own question.

0
Using the verb need through non affirmative structures
0
Verbs and Phrase
3
Transitive or intransitive, that is question
0
Transitive verbs usage
0
Subject Verb Agreement: Singular and plural
1
dummy "it" and the the verb "make"
0
Is the preposition 'to' optional in the following sentence?
0
What are the verb properties of sentences of this type?