Is "funds" a plural or singular noun?

The dictionary enlists it as "fund," but the word "funds" is used quite often and it means money (Ok, it can have other meanings as well. I get that)

how much funds did the organization raise? (because I am talking about an amount)

how many funds did the organization raise?

I don't care if you're a native speaker, but please answer this if you're sure about the correct usage. Many thanks.

Fund is a countable noun meaning an amount of money kept for a specific purpose. There can be many different funds.

Funds, in addition to its meaning as the plural of fund, is used as an uncountable noun synonymous with "money." Thus, it would take the comparative adjective "much" just as "money" does:

How much funds did the organization raise?

However, the construction is awkward, and would seldom be used by a native speaker. Instead, we would say "How much money?"

Funds takes the plural when it serves as the subject:

The funds are not sufficient to the task.

When all is said and done, funds, when used to connote money, is a plural uncountable noun.

According to Cambridge Dictionary, "funds" is a plural noun 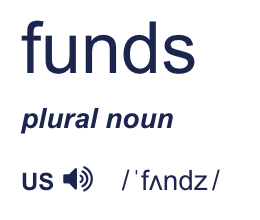 The dict also gives these examples

I’m short of/low on funds at the moment.

The Brownies sold cookies to raise funds for their troop.

The second example use "funds" the same way as you example.

Not the answer you're looking for? Browse other questions tagged grammar singular-vs-plural uncountable-nouns countability countable-nouns or ask your own question.

2
Why is it incorrect to use “how” before an infinitive here?
0
Is 'stationary' singular or plural?
3
How to decide the countability of 'performance'
0
Singular vs. plural in the object of this sentence
1
When sentence's subject contains uncountable noun and plural noun. Is it singular or plural?
2
Is it correct to put adverb between the phrasal verb?
1
Grammaticality in context
1
Livelihood vs livelihoods usage