What does “temporary chicken” mean? What about a “one time chicken”?

I listened to a song called "temporary chicken". Wikipedia explains that it was a strange joke track about a man so desperate for work that he accepted a part-time job in a chicken costume. I would be satisfied with the explanation but the song has words as "one time chicken", but if a man took the job, it means he appeared as a chicken more than once, so I suspect Wikipedia has wrong explanation.

Temporary in this case is being used in the sense of temporary job.

A temporary job refers to an employment situation that is not expected to last a long time. The reasons for this might vary:

There's even a word for workers who are working under temporary conditions: temps. For example:

I remember back in April 2011, I worked as a temp in an accounting office. They hired 4 of us temps to help deal with tax season.

Remember when Marcia had her back surgery? I liked that temp we hired; maybe we should have kept him.

So, in this case, the man was working as working as a chicken, most likely to attract attention near some place of business, much like this guy is doing: 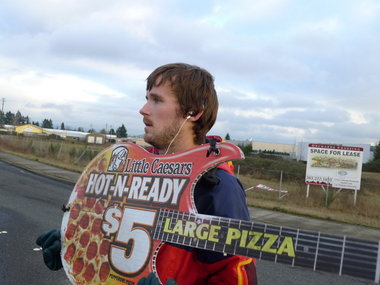 However, he wasn't planning to make a career out of it – he was just a temporary chicken. In fact, I haven't heard the song before, but I suspect it conveys a sentiment that he wanted to get out of that chicken suit as fast as he could, and just about any other job offer that came his way would have been snapped up in a hurry.

the song has words as "one time chicken", but if a man took the job, it means he appeared as a chicken more than once

It's worth pointing out here that "one-time" is an expression meaning "former" (usually hyphenated in that context).

I was a one-time line cook.

that means I worked as a line cook some time in my past. In that context, the phrase "one time" refers not to a single event, but to some stage of my life. In other words:

I was a line cook at one time; specifically, when I was in my early 20s, I worked at a small restaurant cooking mostly French fries and onion rings.

the song has words as "one time chicken"

To my ears he sings "Part time chicken" which would imply he is only working as a chicken part time.