Could I write it as:

Update: To show an example of a Persian compound verb and how its elements can be separated, I attached the following picture (read right to left) The meaning almost is:

We should make ourselves ready for strange things and unfamiliar ways.

make ready is a compound verb and for strange.... are dependent on ready, while we is dependent on make. (we, should, ourselves parts are not in the picture, as the picture is partial) 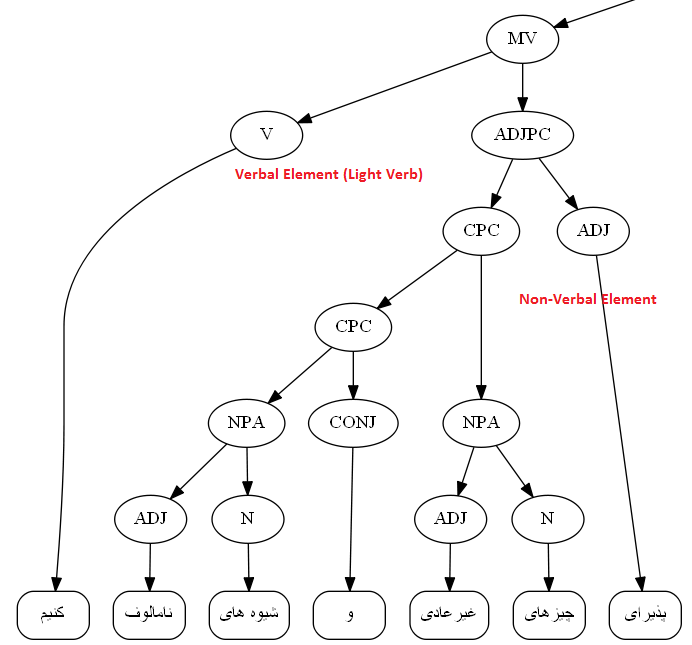 Both of your sentences are grammatical, and they both seem to describe the same construction; but they don't mean quite the same thing.

... each element ... is shown separately and is attached ... Here you have a conjoined predicate—in effect, two predicates sharing the same subject:

... each element ... is shown separately attached ... Here you have a single predicate:

In this case, separately and attached cannot be taken as two distinct predicates: we parse separately as an adverb modifying attached.

The comma marks attached ... as a supplement outside the core structure of the main clause. It is parsed as an adjectival participle clause, and may be taken either as a 'gloss' on separately or as a second, subordinated predicate—in this case they amount to pretty much the same thing.

† In theory the main clause itself could be the 'fallback' referent, but that would be semantically nonsensical—you can't attach the act of showing to a syntactic category!