As a first stab

I cannot understand the meaning of as a first stab in the following sentence.

As a first stab, epistemology is the philosophical study of knowledge: its nature, its requirements, and its limitations.

What does it mean?

When looking in a dictionary, I found out that the meaning of the word stab is as follows: the act of pushing a knife into someone, or an injury caused by stabbing (Cambridge Dictionary)

You've found a definition of stab, however, look carefully at the Cambridge Dictionary entry:

This is for the verb stab, not the noun. Since the sentence talks about making a stab at something, we need to check the noun definitions. 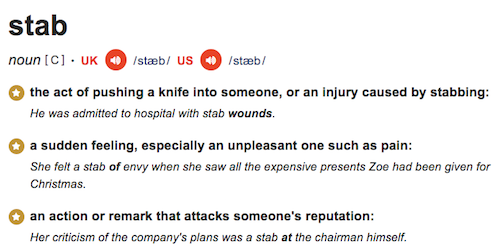 These definitions don't help either, but, if we keep scrolling down, we'll find the links to idiomatic expressions:

However, we may be able to solve the mystery even more quickly simply by consulting a different dictionary. For example, Macmillan's entry for the noun stab looks like this: 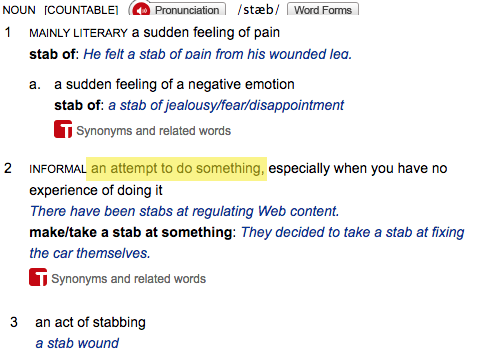 The meaning is found in Definition 2.

By the way, a good way to look up a word in multiple dictionaries is to use OneLook.

Stab in as a first stab means try/attempt as in the more common expression:

Have/make a stab at sth (informal): ​

Reading the whole paragraph the sense is clear:

0
first choice for
3
Use and the meaning of the word EPISTEMIC!
2
What is the difference between “make a case for” and “present the case for”
4
Does “to account for” mean “to take into consideration”?
1
What does ‘first’ mean here?
0
What are first/second/third cousins?
0
First vs at first
0
Meaning of “exempted from coverage” in this context
0
the meaning of “on context”
1
the meaning of “A tv series follows a main character”