I have read the following sentence on a review site and it said:

"The box looked like someone had played football with it".

Can I change the sentence into:

Or is duration not important and is the focus on the result?

As this chart shows, been (which would often be followed by a continuous participle -ing verb form) is the third most common word after looked like someone had... 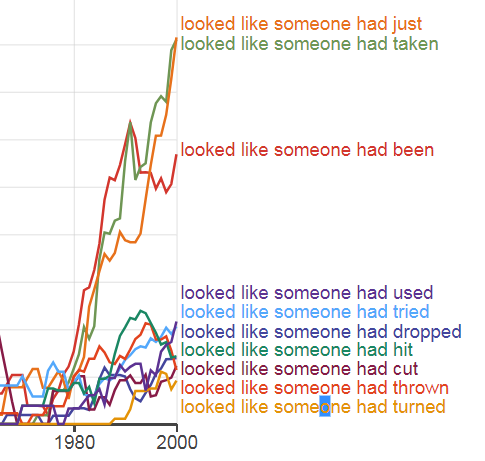 And if you want even more evidence, here are the relevant counts from Google Books...

I'd say that OP's reasoning (playing football is an activity with a duration) is a perfectly good way of looking things. Or we might say the box looks "beat up, tattered" because it's been repeatedly kicked about as if it were a football. As would be reflected by choosing to say it looked like someone had been kicking it, rather than ...had kicked it (which tends to imply only one kick).

You have the sentence start in the past simple, and then move into past perfect. This is a textbook example of the base time of the sentence being the past, and part of it referring to something further back in the past.

The box looked as if, prior to the time the sentence is covering, someone played football with it. You want to change it because playing football is an activity with a duration, and thus you think the progressive is more appropriate.

The past perfect progressive is appropriate to use when the activity had duration, or indeed is a genuine activity at all (using it with stative verbs, verbs that denote states rather than actions, is rarely appropriate). However, that doesn't mean it's always more appropriate. Picking verb forms in English is far more often about knowing what not to use, and then picking from what's left. We often use simple and past participle forms of action verbs.

The difference in meaning between past perfect and past perfect progressive, when they are both appropriate, is usually slight, and frankly sometimes nonexistent for all practical purposes.

Someone had played football with it.

This means that, at some point prior to the base time of the sentence, someone played football with the object. They were no longer doing so at the base time, and there's the nuance that they hadn't just stopped recently. Most likely the speaker didn't witness them doing it. However, that matter, of witness and how long ago they stopped, is a matter of nuance, not essential meaning.

Someone had been playing football with it.

If you want to say they'd just recently stopped playing football with it, to be clear about that, you can do so with either form.

So, yes, you can change the sentence as you describe, but it is not in any demonstrable way better, or more standard, or more right. When it comes to aspect, a lot of the time the choice is stylistic or about (sometimes very subtle) nuance.

Not the answer you're looking for? Browse other questions tagged past-perfect past-perfect-continuous or ask your own question.

3
“She had grown up, and it was said that she became a barmaid, kind and generous.” - is it awkward to use Past Perfect here?
3
Maise ate / had been eating sweets all evening so it was not suprising > she didn't want any supper
1
Are there cases when we can use the past simple before “since” in a past context?
1
Past perfect for repeated activity in the past
2
Should this reported speech use “was” or “had been” to convert “was”?
1
Use of Past Perfect for a state/action that isn't true anymore
4
Difference between Past continuous and Past perfect continuous
2
Why Present Perfect or Present Perfect Continuous? Sentences are added
0
Can the past perfect continuous be substituted with the past continuous?
0
played guitar/had played guitar at the party