air pocket (noun) an area in the sky where the air is flowing differently from the way it is in the surrounding parts. Air pockets can sometimes cause aircraft to go up or down suddenly.

But what does the term mean in this news story?

“The one stock that could kind of surface as strong here is Netflix,” he said on CNBC’s “Trading Nation.” “You’re definitely seeing a little bit of relative strength. There’s a pretty good air pocket right there between FANG and Netflix.”

Edit: The story also says that FANG is: 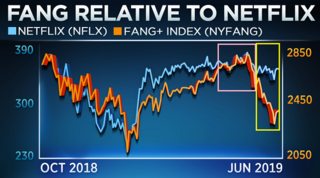 The story is essentially trying to point out how, even though the value of FANG and Netflix were relatively close for some time (shown in pink), a significant difference had emerged in recent weeks (shown in yellow).

"There’s a pretty good cushion right there between FANG and Netflix.”

This would be a similarly figurative use – although cushion usually refers to some kind of pillow or soft padding, there is also this definition (found at Wordnik):

cushion (noun) figuratively a sufficient quantity of an intangible object (like points or minutes) to allow for some of those points, for example, to be lost without hurting one's chances for successfully completing an objective.

Perhaps the speaker has some experience as a pilot, though, so "air pocket" was a natural metaphor. Or maybe the speaker wanted to use an expression that not only highlighted the growing difference in value, but also the steep drop that the FANG index was undergoing at the time. Since air pockets can push planes downward, it's an apt metaphor.

In my field of mechanical engineering, air pocket is a widely used term to call the hollow area inside a body of fluid. To my interpretation, the speaker just want to say that there is a gap between NFLX and the rest of the FANG.