What does “Rabid, rabid” mean

What does "Rabid, rabid" mean in this image? 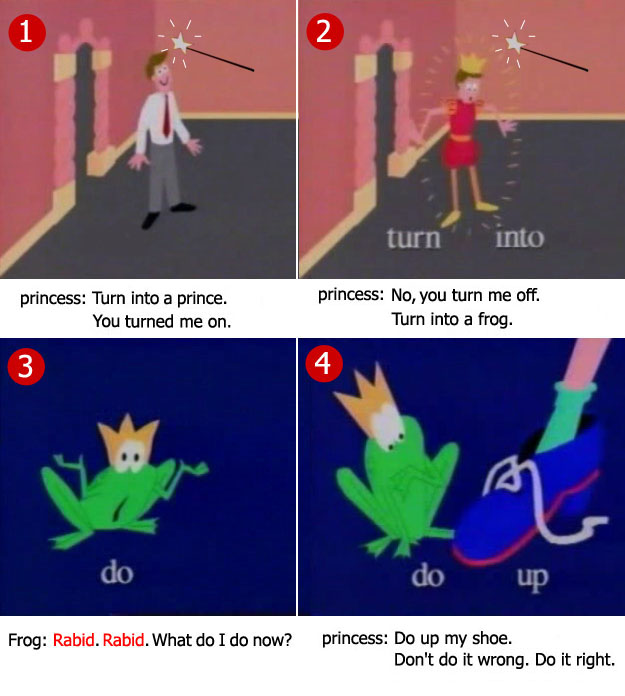 "Rabid, rabid" here is just imitating the noise that a frog makes. Like we say "The dog says 'woof'" or "The cat says 'meow'". The fact that "rabid" is a word referring to an animal disease is just a coincidence.

I think it's more common for English speakers to say that a frog says "ribbit" or "ribbid", but in this context I don't see any significance to the non-standard attempt to spell out the sound.

"Rabid" is not what frogs say in idiomatic English

As other answers have indicated, the source in question appears to be trying to represent the sound a frog makes. It made several mistakes unfortunately, and don't seem to be a good source for learning English. While "rabid" is understandable in context (if somewhat jarring), using it out of context would be downright confusing, since "rabid" means "having rabies".

The idiomatic spelling is "ribbit"

It is the conventional and idiomatic way to spell the sound in question in English.

The resource in question tries hard, but is not a good representation of English. There are many non-idiomatic phrases, and the phrases "turn on" and "turn off" as used imply sexual arousal, something not appropriate in a children's book, indicating the possibility that the text was translated incorrectly from another language. A better resource is Woodward English (I'm not affiliated with them in any way, but have used their materials in my own ESL classes): https://www.woodwardenglish.com/

"Rabid Rabid" here is intended to represent the croaking noise that a frog makes. It is more often represented as "Ribbit, Ribbit." As with other traditional representations of animal sounds, like "Moo" for a cow, "Meow" for a cat, "Caw" for a crow, and so on, it is at best a rough approximation to the actual sound.