What is this thing that you put a sword in called?

I have played Ocarina of Time and Majora's Mask and I am always asking: "What is this thing on Link's back?" It's for putting the sword, I know that, but what it's called? I have searched for "sword quiver" and it only showed quivers. So, what is it called? 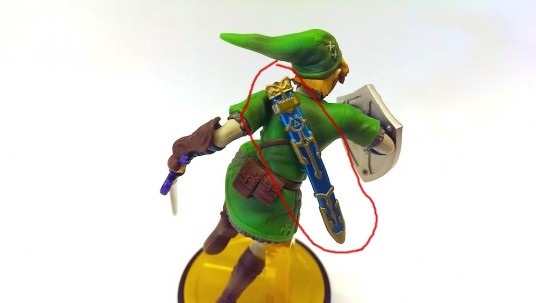 It's called a scabbard or sheath:

a long, thin cover for the blade of a sword, usually attached to a belt

Scabbard is the more specific word used, Where sheath is used more generally.

Scabbard (noun) Definition: a holder for a bladed weapon such as a sword or bayonet; sheath.

Sheath (noun) Definition: something that surrounds and protects another thing.

Sheath refers to a outer casing on multiple different things. A scabbard is a type of sheath specifically for swords, blades, or guns.

From Wikipedia, the free encyclopedia

Sheath may refer to:

A scabbard is a sheath for holding a sword, knife, or other large blade. ... Most commonly, sword scabbards were worn suspended from a sword belt or shoulder belt called a baldric.

'baldric' is the thing that holds swords on your back. Proof: this Bing images search

As others have said, it can be sheath or scabbard. The two terms appear to be roughly equally common, so there isn't much to choose between them.

A close-fitting cover for the blade of a knife or sword (Lexico, definition 1 for sheath)

A sheath for the blade of a sword or dagger, typically made of leather or metal. (Lexico, definition 1 for scabbard)

I personally use the term "sheath", but "scabbard" seems equally satisfactory.

Other answers and comments have made arguments against the term "sheath". These arguments are very weak. It has been contended that a scabbard is specifically for a sword, whereas a sheath can be for other types of weapons or tools. In fact, the word "scabbard" is also used for things other than swords. But even if we assume that the word "sheath" has a broader meaning (it's certainly the only one of the two terms that can be applied to covering for electric cables) or that "sheath" is more often used for non-swords than "scabbard" is, it doesn't mean that the term "sheath" should be avoided or "scabbard" preferred, since in the vast majority of cases there is no scope for ambiguity in context.

It has also been argued that "sheath" has a sexual double-meaning in slang. So do a lot of words: weapon, tool, thing, beaver, and so on. It would be absurd and pointless to try to avoid all these words just because someone with an adolescent mindset might snigger at them.

Another user has suggested baldric, defined by Lexico as follows:

historical A belt for a sword or other piece of equipment, worn over one shoulder and reaching down to the opposite hip. (Lexico)

Clearly the meaning here is slightly different and more specific and is also largely restricted to historical contexts or references.

18
What do you call this thing? "bag"?
18
What do you call this thing that comes with any Apple product
2
What is called the thing that other things are dependent on?
1
What is it called in English? (the part that closes dumbbell bar weights?)
3
Term for this kind of door
0
What is this movement to dodge a swinging sword called?
1
What is this thing in browsers called in English?
6
What's this kind of chicken products package called?
22
What is this "opened" cube called?
13
What is it called when somebody's words sort of echo in your mind?