Recently while I was searching for the information of one of my favourite newspaper I came across an interesting thing about the gender of newspapers. For every newspaper that was owned by a single organisation, they were using the term "sister newspapers" as given in the image attached. I googled and searched about 'newspaper' but could not find any dictionary classifying it into male or female.

Although I understand what they wanted to imply but I want to understand why they used the term "sister newspapers" (grammatical logic behind it).

https://en.wikipedia.org/wiki/Sister_paper - This is the definition of 'sister paper' as per Wikipedia but it is not satisfying enough to understand the grammatical logic behind using it. 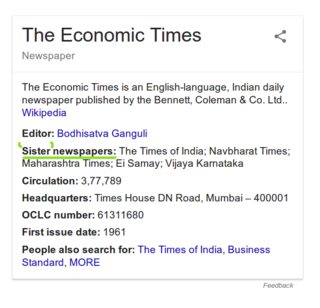 I am fairly sure that the use of "sister (news)paper" is not based on some kind of implicit feminine gender associated with the word "newspaper". It's a more general metaphor.

English speakers sometimes personify objects, and one aspect of personification is assigning a gender to an object. This assigned gender is not based on some property of the word; it's based on the context, and occasionally on properties of the object. So you could just as well say things like "sister publication" or "sister journal" or "sister periodical". There isn't anything especially feminine about the particular word "newspaper", so a dictionary entry for the word will not classify it as female (or as male).

The use of "sister" in this context is conventional; there isn't any particular logic behind it. Personifying inanimate objects as feminine is more common than personifying them as masculine. (Personification of either type is pretty rare, though.) You can read more about some similar phenomena in the answers to the ELU question "Is it a good practice to refer to countries, ships etc using the feminine form?"

"Sister" is also used in the phrase "sister cities". The feminine word "daughter" is used in the expression "daughter cells", even when you're talking about a man's cells. As a practical matter, I would recommend just learning the meaning of "sister" in this context, rather than trying to understand why the word "sister" came to be used this way.

As Robusto says, English nouns don't have gender. The idea of things being male or female is a common and colorful conceit, nothing more. For example, boats (and sometimes other vehicles) are usually considered to be female. Dogs are often considered male by default, while many talk about cats as female by default.

In such cases the noun itself does not change, so instead we use gendered pronouns:

Is that your dog? What a good boy! What's his name?

She's an old boat, but I think she's got at least a few good voyages left in her.

That being said, I expect that describing nouns as female is more common than male. Cities will often have "sister cities" in other countries, as a sign of good international relations, as do some schools, government agencies, charitable organizations, and others.

The term "sister newspapers" might mean some kind of professional relationship, but it more likely means that they are all owned by the same parent media company.

Not the answer you're looking for? Browse other questions tagged grammaticality-in-context gender or ask your own question.

34
Grammatical gender of the word "child"
29
Does the English language have a grammatical gender?
4
"sister-site": noun gender
2
Is "I heard the bough broken off by its own weight" correct in grammar?
2
Can the grammar (have something done) be used when an "appliance" rather than a "person" does something for us?