Could they be different in their usage?

There are two forms of inflection: ed-ed (regular) vs. irregular (like drink-drank-drunk)

When native speakers use the verbs as past which one is prevalent and is there any case that certain forms should be used?

Throve/thriven and thrived/thrived are all correct; however, the regular forms are more prevalent than the irregular ones in Present Day English.

According to this blog post, throve was the original past tense of thrive used during the nineteeth century. That blog further says that it declined rapidly in use from 1910 onwards and seems to have regularised to thrived.

There was a plethora of regular verbs (whose past tenses end in -ed) and very few irregular verbs, people started associating thrive with regular verbs and regularised the original past tense throve (and thriven) to thrived by analogy with so many other regular verbs. The linked blog also says that Americans now only use thrived and throve can still be found in British English.

Analogy (or 'analogical change')1 is a type of language change in which some forms are deliberately changed merely to make them look more like other forms (Trask). (Go to the link where I've explained analogy in detail. I have explained why the W in 'sword' is silent but pronounced in 'swore'.)

According to James Blevins & Juliette Blevins (Analogy in Grammar p1), 'The human mind is an inveterate pattern-seeker. Once found, patterns are classified, related to other patterns, and used to predict yet further patterns and correlations'.

It means we tend to associate one form with another and make patterns as the examples in this answer (analogy) illustrate.

Analogical change can also perform in the opposite way, for instance, the original past tense of catch was catched, but was changed to the irregular caught by analogy with taught. And the irregular drive-drove is extended in some dialects of English to dive, so that dive-dived has become dive-dove (Trask). 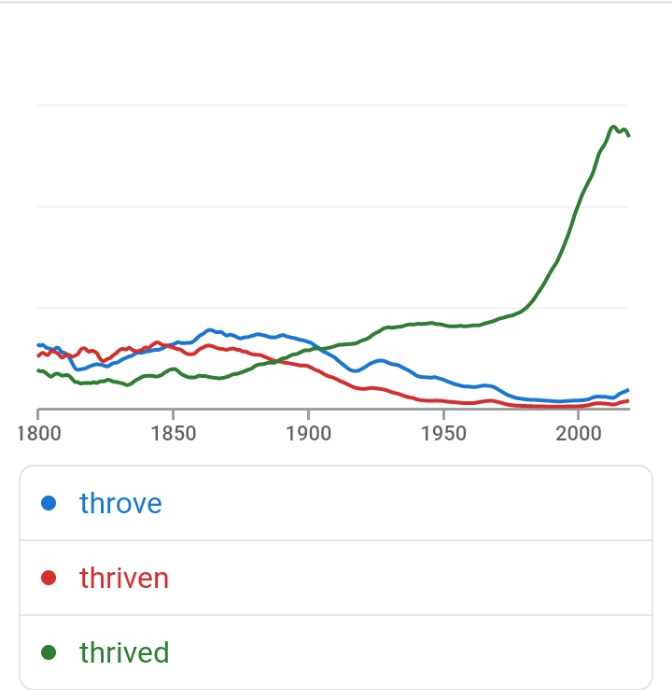 Here are detailed graphs of the usage of 'throve' and 'thrived' in the 19th century: 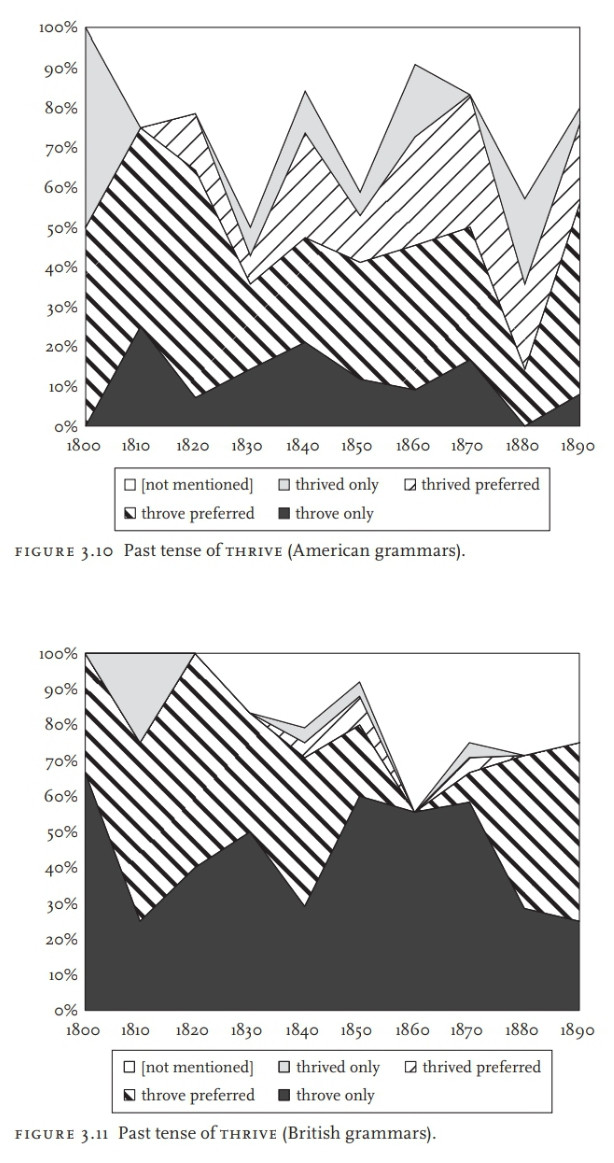 [Language between description and prescription: Verbs and verb categories in nineteenth century grammars of English by Lieselotte Anderwald p90]

Not the answer you're looking for? Browse other questions tagged verbs verb-usage irregular-forms .

9
Do verb tenses have to remain absolutely consistent through a piece of writing?
1
How to write a sentence that contains two verbs, and these occur at the same time or one after another?
1
Using the verb 'cover' to mean pay for
1
Irregular verbs with two past forms
0
Why "ask someone on something" impossible?
2
Is the past simple and past participle the same for all regular verbs?
0
"See" vs "Can see" - ultimate question
0
"Get out" VS "Leak out"
1
Regular weak verb vs Irregular strong verb