There was a time when people thought it was a good idea to control the movements of a computer game character with the W, A, S, and D keys, and admittedly, many still do. It shows not just how desperate they were for computer games and hardware yet to be invented, but how the idea of using a computer to play games is one of those inborn instincts, like the natural, primal desires to cook meals over an open fire and to avoid mimes.

What kind of mimes are they talking about?

This is the ordinary sense of mime as a performer who depicts characters and stories solely through movement and gesture, without words or other sound.

Aversion to mimes is a longstanding trope in American culture. 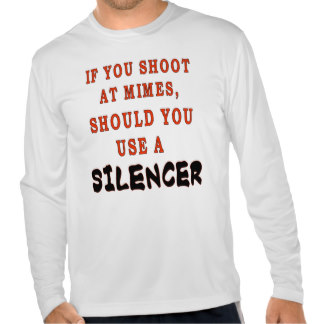 "Until I came here to America, I'd never realized that you were right: nobody in the world likes mime."
— David Bowie's 60th Birthday Message to John Peel

Mimes are universally hated in fiction. They're an Acceptable Target of sorts. No real reason is ever given, but the Uncanny Valley may have something to do with it - after all, their pure white faces and refusal to speak give them a definite alien aura. This trope isn't limited to people who hate mimes, but also works of fiction that seem to have it out for them. In other words a character doesn't have to say "I hate mimes" for it to be this trope. All the character needs to do is fall on, punch, kick, or otherwise cause intentional or accidental harm to a mime.
—tvtropes.org

This distaste arose in the 1950s and 60s when mime of the Decroux school, employing dance-like, often abstract movement for a wide variety of narrative emotional effects, displaced the established naturlistic style of comic mime. (The costume of the French school's most famous performer, Marcel Marceau, is still the stereotype image of the mime.) Mime came to be regarded as high-brow and precious, an entertainment for intellectuals rather than 'real people'. This attitude was exacerbated when American artists and students of the counterculture embraced the form and began to appear as street performers, often importunate and annoying.

Eventually the trope was reinforced by the related Monster Clown.

I think it's an allusion to a recurring stereotype among less-traveled Americans that the streets of some European cities are full of mimes (actors of pantomime) that wait for an unsuspecting tourist to walk too close to them and become part of their performance, and that the only way not to get laughed at by all witnesses is to try to avoid getting too near any mimes.