“People with messy handwriting have brain working faster than their hands” Why no determiner?

So why is it? In what way are brains different from hands in this sentence? Finally, would it be OK if I added "their" before "brain", or would that sound unnatural to a native speaker ear? 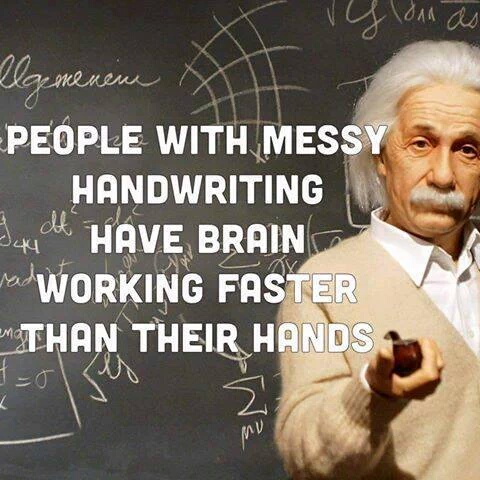 People with messy handwriting have brain working faster than their hands.

This is not a grammatically correct sentence, though the meaning is still mostly clear. You suggested:

People with messy handwriting have their brain working faster than their hands.

This could work, but if you think about it, this sentence suggests that people can choose how fast their brain and/or hands work, and have those knobs set such that their brain is working faster than their hands.

People with messy handwriting have brains working faster than their hands.

In this one, I take issue with the fact that hands has their before it, but brains has no such word.

I think it should be:

People with messy handwriting have brains that work faster than their hands.

This helps convey that they didn't choose the speed of their brain or hands, it's just part of who they are. And as a result of this speed difference, they have messy handwriting. It also implies that they are smarter than the average person, not that they have slow hands.

Whether this grammatical inaccuracy was intentional or not is hard to say. It could be that they were imitating (as some comments said) a "Confucius say" or "I can haz cheezburger" style meme, or trying to reference itself, suggesting that the writer of the meme's brain was working too fast to translate into proper text. I think it was more likely just a mistake.

In terms of normal everyday English, we would expect some sort of determiner before brain, be it their or the or a.

There are several ways that this sentence can be considered grammatical. The first is if the caption is seen to use 'headlinese', that is the type of English seen these days (but not always) in headlines; articles and other words such as the verb to be are omitted. Of course it would be better to be consistent and omit the their before hands also.

There is also a certain type of 'abbreviated' English (there may be a technical term to it, and it is similar but not the same as headlinese). This is the kind of English we use when we make lists or instructions, and in this case articles are omitted. So I could make a list of things to do and write

Many recipes, which are instructions, leave out the the before oven in such a statement as

Then, of course, there are stereotypical but real signs such as

Some people want to say that the is omitted before dog to save space. But it can't take that much more space to go ahead and include it. So this is some kind of cautionary statement. Perhaps the omission of an article is to avoid saying how many dogs are on the property, but why not just write 'Beware of Dogs'? Another interpretation is that dog could be considered as a 'unique role' here, and we can omit the article in that case ('We elected him to be president'.) For instance, someone could stick a sign up in front of the White House saying Beware of President and it would be grammatical. Here, though, dog would have to be thought of as short for something such as guard dog.

Whatever the case, the caption would be more consistent if it either used or omitted their before both brain and hands. And yes, certainly in unmarked or everyday spoken English, we would expect a determiner before brain.

It is also grammatical if brain is being used as a non-count noun in the same sense as brain matter (analogous to grey matter). People are free to be creative with language and their use of words. However, we don't know the author's intention in this case.

Matter, when it means substance, is a non-count or 'uncountable' noun.

There should be a determiner there.

Or you could do;

The determiner is an important noun modifier which provides introduces and provides context to a noun, often in terms of quantity and possession.

This the reason you can take away the determiner and make the subject plural (in this sentence) instead. because the (s) explains the quantity so it would be redundant to use the determiner.

But you can't always do this (and you don't have to).

I believe the statement also depicts what it is trying to express, I understand because this happens to me all the time. So the statement shows that although the brain knows the correct sentence to put down being " people with messy handwriting have their brain working faster than their hands' But because the brain already moved on with the correct statement, the hand only types where it catches the brain. Hence the statement appearing to be in wrong English.

Not the answer you're looking for? Browse other questions tagged determiners or ask your own question.

2
Why do we have to use a determiner “their”?