Past tense when narrating dreams 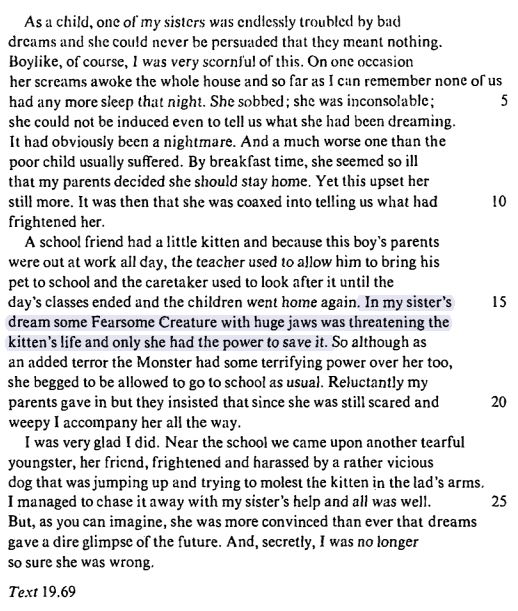 The author later states that when the content of the dream is narrated, the past tenses 'was threatening','had' relate not to 'breakfast time', but to an earlier point (namely just before the girl's awakening).

If these actions happened before some other explicit time point, why do they have the past tense without perfective? I'm guessing it's because the past-in-the-past time is being identified by 'In my sister's dream', so there's no real need for the perfective to do it - but I'm not sure if that's the right interpretation.

A similar example from another book:

I rolled to my hands and knees, shook myself all over and then came to my feet. A dream, I told myself. Only a dream. Fear and shame washed over me, dirtying me in their passage. In my dream I had pleaded for mercy as I had not in reality.

What's the difference? Any help? Thanks.

He is describing the dream itself as it was unfolding, not in relation to an event that occurred before or after it. You are showing a fundamental misunderstanding of tenses when you claim that the dream occurred before some other event, for ALL events are preceded by other events and followed by yet other events. Objective reality is irrelevant to the choice of tense. It is the speaker's subjective presentation of the event, the speaker's "framing" of the event, that is relevant.

Here the speaker is describing a past series of dream-events as the dream unfolded to his sister:

In my sister's dream some Fearsome Creature was threatening the kitten's life and only she had the power to save it.

If he wanted to describe his sister's dream in terms of one that he himself had dreamed, let's say a week afterwards, then he might well use the past perfect:

In my sister's dream some Fearsome Creature had been threatening the kitten's life and only she had had the power to save it, whereas in my own dream, possibly influenced by hers, the kitten itself assumed monstrous proportions and was threatening a mouse wearing a bow-tie, and no one was able to save this mouse but the mouse itself.

Not the answer you're looking for? Browse other questions tagged tense past-tense or ask your own question.

2
Cutaway Past Perfect in Narrative Discourse vs. Past Simple
4
Simple Past Tense or Past Progressive Tense?
2
dreams in the present tense
1
Strong vs. Weak Verbs: Plus Verbs with Many Different Past Tenses and Past Participles
0
Related to past tense
2
Past Tense or Past Continuous Tense with precise time
0
Present/ Past tense between sentences with past tense?
0
can I use simple past tense in sentences that begin with when?