Which part of speech is "left" in "now there are only 5 cars left"?

I've always thought (perhaps, erroneously) that if there is some ambiguity in determining whether the given word is an adjective or a past participle, you need to look at whether the "source" of action is mentioned in the sentence. If the source is not mentioned, then it is an adjective. For example:

The disappointed boy was sitting on a bench.

But when the source is mentioned, then it is a past participle. For example:

The boy was greatly disappointed by his mom.

Here, we know the "source" - the boy's mom - therefore, disappointed is a past participle here.

However, this method doesn't seem to work in the following sentence:

Firstly, I thought that, since the source is not mentioned, it was either an adjective or an adverb, but the Wiktionary page doesn't reserve this meaning for the adjective "left" or for the adverb "left". It reserves that meaning only for the past participle "left", which is one of the forms of the verb "leave". So, most likely the word "left" in this sentence is a past participle.

However, the "source of leaving" is not mentioned in the sentence and it is not even implied, which means that the method that I've been using was wrong. But then I am really at loss in how to differentiate between adjectives and past participles.

Depending on how the sentence is parsed, "left" can apparently be considered a verb, an adverb, or even a preposition. (I can't fully explain the latter, but perhaps a generative grammar person can chime in).

Ambiguity in parts of speech

Parts of speech can be tricky in that they can depend on how a sentence is parsed. One problem with theories of linguistics, in fact, is that they can't always fully account for things that are left out of some utterances (yet presumed by the speaker and/or addressee), but which can influence how an utterance is perceived and parsed. This sentence is a good example, since

So now there are only 5 cars left in the parking lot.

could be understood somewhat differently depending on it is broken up, where the main ambiguity is whether "left" is part of a subordinate clause describing the five cars, or whether "in the parking lot" is where the cars have been left (by some unknown/presumed agent(s)):

These different ways of parsing the phrase might seem like splitting hairs (and in practice they're almost entirely irrelevant), but which one of these or other interpretations one starts with can make a difference as to what part of speech "left" can be analyzed as.

So while at first glance this seems like a fairly simple question, plugging the example sentence into an online Linguistics Tree Solver didn't immediately offer a easy or even a single way to parse it. In fact, there were so many possible permutations I lost track of them, but below are some.*

I started out inserting "that were" before "left" because it seemed like that would make it obvious there was a hidden subordinate clause containing "left in the parking lot", but the Tree Solver didn't see it that way: 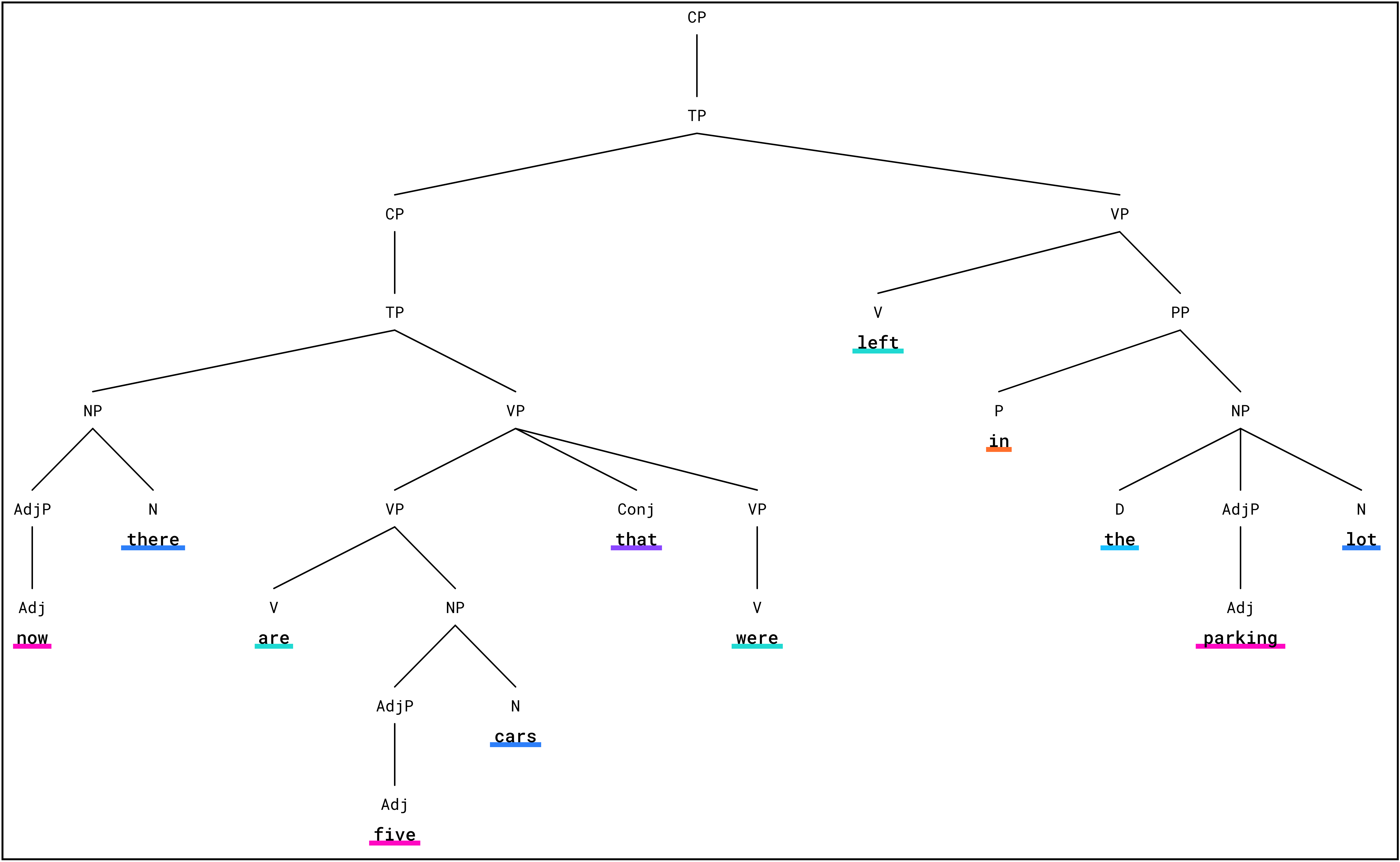 Using the original sentence and specifying "left" as a verb, as suggested by the tree above, generated this tree, which was unsatisfying because "left in the parking lot" didn't feel like its own, separate verb phrase in my interpretation: 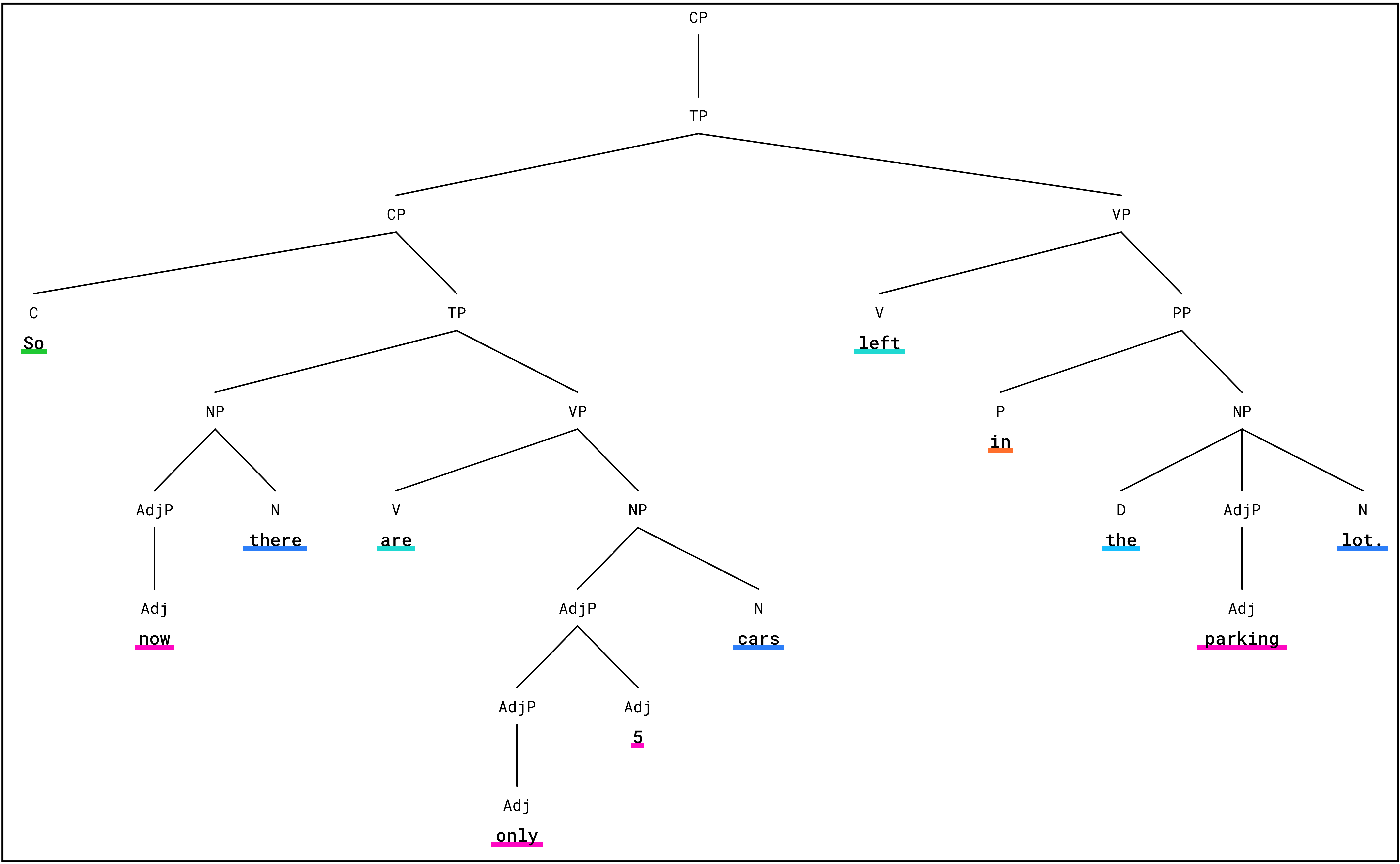 If "left" was specified as an adverb, the tree was closer to what I would originally have expected, with "only 5...in the parking lot" as a single verb phrase:

However, this still wasn't entirely satisfying so I attempted some other possible combinations. The Linguistics Tree Solver will attempt to make trees based on three different sets of syntax rules. Here's the same tree as above drawn using X-Bar Theory, a more complex set of syntax rules: 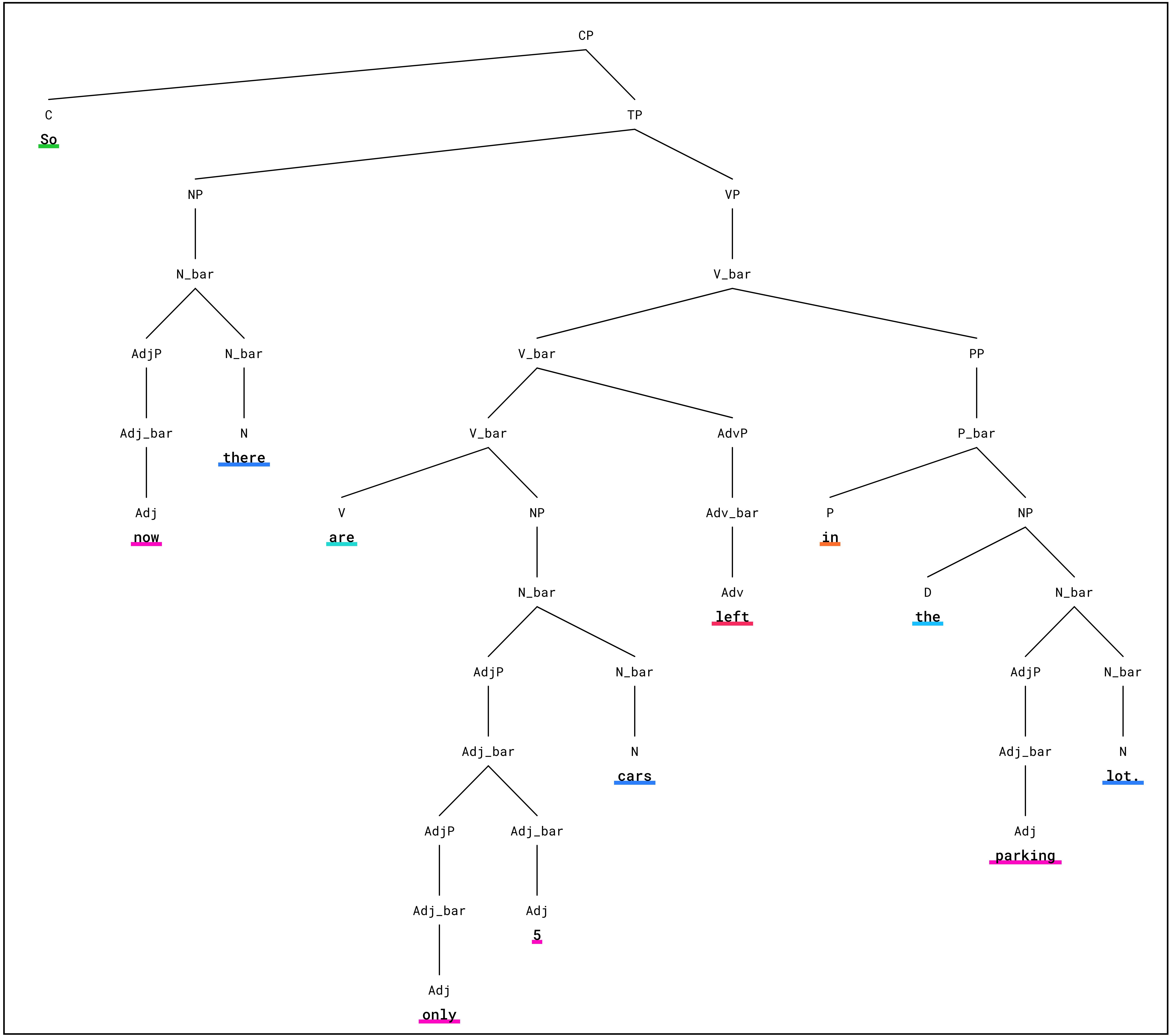 In addition to generating trees with "left" as a verb or adverb, The X-Bar Theory syntax generated a tree in which "left" was a preposition—and even appeared to prefer that among the three possibilities.† 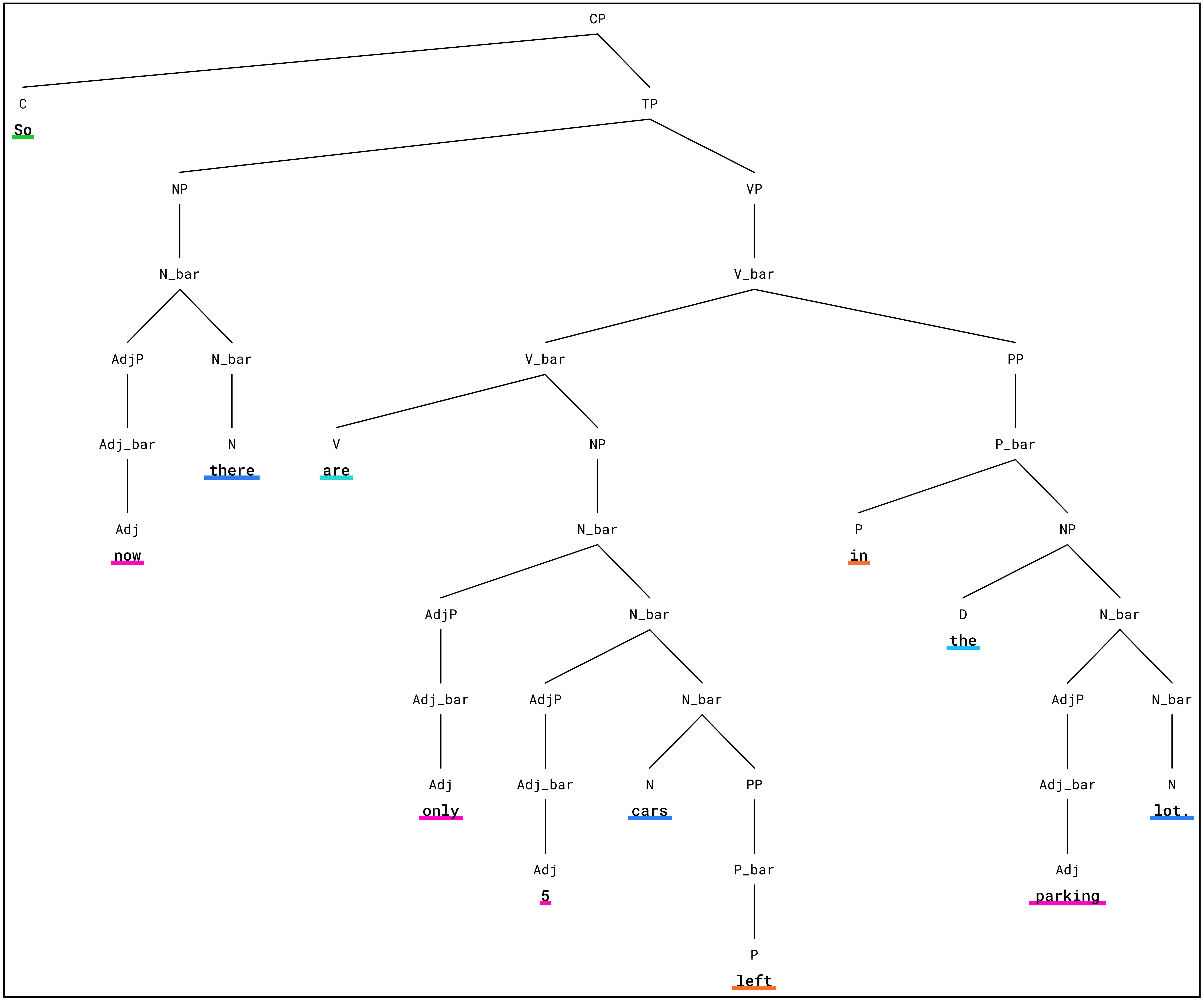 It seems counterintuitive that "left" could be a preposition (P) in a prepositional phrase (PP) without a noun before which it is "pre-positioned," but perhaps that's because of the pernicious idea that a preposition must always come before something (e.g. that prepositions shouldn't end sentences, which is a fallacy we should disabuse ourselves of).

A final note on the "PP" notation in the last tree, which is short for "prepositional phrase"—not to be confused with "past participle." I mention this because, as your question notes, "left" is the past participle of "leave." And while one answer notes that you're right about that, I don't think that answer is precisely correct that a participle (past or otherwise) is a "part of speech". Rather a participle is one form of a specific part of speech, the verb, albeit a confusing one since it can function as other parts of speech, all the while not being a part of speech itself. Some supporting evidence:

In English a participle generally "can function independently as an adjective" (my emphasis). And a past participle specifically is

a verb form...that is used as a verbal adjective in phrases such as "finished work" and "baked beans" and with auxiliaries [where it remains a verb] to form the passive voice or perfect and pluperfect tenses in constructions such as "The work was finished" and "She had baked the beans". [my emphasis and add'l punctuation]

*The Linguistics Tree Solver tool requires the user to specify the (possible) part(s) of speech for each word in order to construct the tree, so while I attempted to try all possible permutations in order to get it to recognize the grammar of the sentence, it's possible I missed some and that there are additional ways to parse this sentence.

†By "prefer" I mean that if verb, adverb, and preposition were all selected as possible parts of speech for "leave", the tree was generated with "leave" as a preposition.

So now there are only 5 cars left in the parking lot.

can be "simplified" to:

Cars are left in the parking lot.

So you are correct when saying that in this case, 'left' is a participle.

As it is usual with passive voice, the actor who performed the action is not mentioned:

The ceiling is painted.

Which can be extended to:

The ceiling was painted by Michelangelo.

Using "There are only 5 cars left" means that someone or something took the others (leaving the rest), and in this sentence no person is actually mentioned. Presumably, these could be self-driving cars, since they are described as having driven away, not having been driven away; they are acting, not being acted upon. For this reason, they continue to act in the final sentence; only 5 cars remain.

In my point of view. There are 3 kinds of adjectives.

So, the answer to your question is "left" is an adjective as Word Class in your sentence because there is no participle in Nine Word Classes.

1
How many tickets do you have left? (the modification of 'left')