What does “develop a drag” mean in this context?

“Look at the balance on it! If the Nimbus series has a fault, it's a slight list to the tail end — you often find they develop a drag after a few years. They've updated the handle too, a bit slimmer than the Cleansweeps, reminds me of the old Silver Arrows — a pity they've stopped making them. I learned to fly on one, and a very fine old broom it was too…”

I'm not sure what "a drag" is supposed to mean here. The context is talking about the broomsticks they flew on. I've looked up the word 'drag' in dictionaries, but I don't know which one is fit for the context.

The correct definition is this one:

physics: the retarding force acting on a body (such as an airplane) moving through a fluid (such as air) parallel and opposite to the direction of motion
Merriam-Webster

Yeah, that's hard to understand. It's roughly synonymous with "air resistance" (or "water resistance" if traveling through water, etc.). Drag is what makes a parachute slow down when falling, for example.

An image makes it a little clearer: 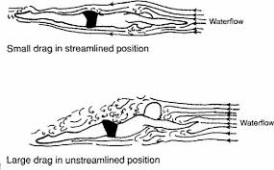 In other words, after a few years brooms slow down because they are experiencing increased air resistance (I've always thought that this was because the bristles get bent and stick out).

I knew you were referring to the movement version of the word "drag" so with that in mind, I found this:

2) Drag (noun): motion effected with slowness or difficulty also : the condition of having or seeming to have such motion. Merriam

However, since you're referring to a flying broom, to be accurate, I looked up the aerodynamic definition of the word "drag".

NASA (with some edits):

Drag is the aerodynamic force that opposes an aircraft's motion through the air (in this case, the "aircraft" happens to be a broom). Drag is generated by every part of the broom (even a listing, tail end!).

I hope that helps.

Not the answer you're looking for? Browse other questions tagged word-meaning phrase-meaning or ask your own question.