I'm uploading a picture here because I cannot provide the link of the article. It's a tweet wherein the poster has to write a tweet manually. The main article does not have the sentence in concern. 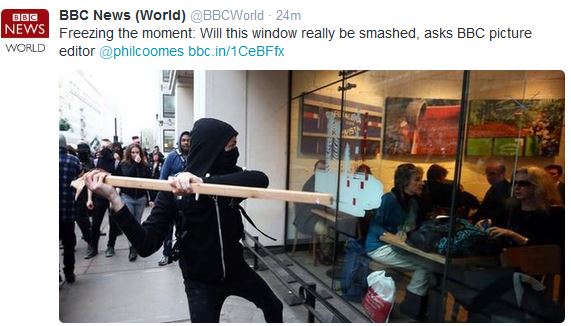 Will this window really be smashed

Will this window really get smashed

Using 'be' there talks about whether the glass is tough enough to bear the stroke of that thick stick. In an example, I can express

But then using get clearly asks us to guess whether the event of glass breaking really happened!

Will this window really get smashed ~ Yes, nobody could stop that mask man. It really got smashed.

In short, it's being (capability) over getting (happening).

Will this window really be smashed

This is just a passive construction: BE + Past Participle. I don't think that the use of this construction places a special emphasis on the toughness of the glass. Maybe the guy wielding a stick will have second thoughts and will not smash the glass.

Will this window really get smashed

Is also a passive construction, but more informal. This construction is used in sentences like

He guy that smashed the glass got caught by the police.

The structure with be tends to be used to refer to more deliberate, planned actions. Compared with the get structure, it is more often used with an agent mentioned:

Will this window be smashed by this man?

The structure with get puts a greater emphasis on the subject's condition, and is less often used with an expressly mentioned agent. It doesn't need an agent in the way be + Past Participle needs it.

Imagine you've overheard a sentence said by a policeman to another policeman as you were passing by:

The window was broken.

We came to the shop long after the riot. The streets were empty. I had no trouble entering the shop. The window was broken.

On the other hand, he might've been saying:

We came to the shop in the midst of the riot. A man was wielding a stick. We couldn't stop him. The window was broken.

See? Was broken needs an agent ("broken by a man") to be less ambiguous.

.. The window got broken.

There's less ambiguity: we know he refers to the process of breaking.