Villages and hamlets in US native parlance

How common or uncommon are the words village and hamlet in US native parlance? In the small discussion following this comment, one user said that the word village is not a word we use here, but another one said There are villages in the US! I live in one, and it is inside a town.. There is a Wikipedia article Village (United States) that discusses some of the formal issues.

I've always taken village as a translation of the Dutch word dorp, a concentration of human settlement ranging from a few dozen people to a few thousand, in a rural area, not connected to any town or city. Here is a nice example with the village of Rougon in the French Alps (photo from Wikimedia Commons): 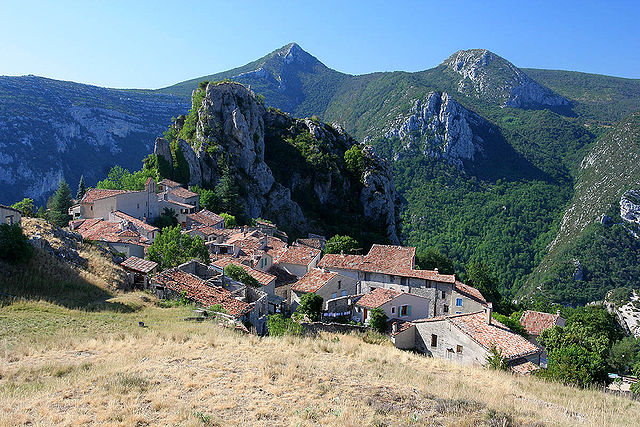 What would such a settlement be called in the US? Do such settlements even exist in North America? Can a place with between 10 and 1000 inhabitants be called a (small) town rather than a village? From this Wikipedia article comes the quote Eighty-nine percent of the cities in Nebraska have fewer than 3,000 people.. Are those really cities?

P.S. I'm pretty sure the word village in the UK and Ireland matches the meaning that I'm thinking of pretty much.

The term 'village' is common in some parts of the US, and rare or marked in others. In some States, 'village' is a formal designation for a settlement smaller than a city, for a neighborhood within a city, or for a historical area. In other States village is not formally used, and is simply an informal or quaint term for a small town. So if you ask native speakers from the US about 'village', their answers might vary depending on where they are from, and they might not be aware of different usages in different parts of the country. It's a big place; although the shared language can make it seem smaller there are still distinct regional vocabularies.

The term 'hamlet' is rare throughout the US, except in reference to the Prince of Denmark. There are probably a few places that use that name, but it would carry a markedly antique connotation.

Some current uses of the term "village" in the US:

For the most part in the US, a large collection of people and buildings is a "city" and a smaller collection is a "town".

As Mark Beadles says, each state has specific legal definitions. These may depend on population and/or on specific formalities about how the place is organized politically. I think every state has a legal definition of "city". Some call other places "villages", "towns", maybe some other terms. While we generally think of a "city" as a place with at least tens of thousands of people, many smaller places are legally considered "cities". I think to most Americans it sounds funny to call a place with 1,000 people a "city", but it's recognized as the technical legal term.

To most Americans, "village" has a certain old-time, quaint connotation. We generally think of a "village" as a picturesque, out-of-date, foreign place. We also talk about primitive people living in a "village" of mud huts or some such primitive accommodations. I grew up near a town that was officially called the "Incorporated Village of Northport", but no one referred to it as a "village", it was always a "town". Some places call themselves a village when they want to bring picturesque images to mind, to attract tourists or shoppers, for example.

Not the answer you're looking for? Browse other questions tagged word-usage american-english .

7
To live in village or on country?

5
yet and nevertheless together
0
Is that true what native English speakers are using more sentence form like "How/Wh~ does/ do /did"?
3
Using 'may' and 'might' in AmE
2
Using "native" as a noun to refer to native speakers
17
How to distinguish between American Indians and Indian Indians in native English (language) parlance?
1
Are "a native Chinese" or "a native Chinese person" normal English phrases?
0
what is the meaning of "native" in "native year"?
1
Explaining S suffix to non-native English speaker