What is the name for the bit of the bell that actually rings?

A bell consists of a large hollow piece of metal (or, rarely, some other material) and a clapper which strikes the metal and makes it ring.

Is there a word that distinguishes specifically the big, cup-shaped piece of metal that gets hit, from the instrument as a whole?

The best I could come up with is 'bell head', but the internet gives me only "Bellhead":

(slang) A supporter of traditional centralized telecommunications networks, contrasted with nethead (a supporter of the Internet and its flexibility and technical underpinnings).

It appears the part where the clapper or hammer hits the bell from the inside is called the sound bow. And the entire shape of the bell is called a cup

From The Carillon: How it works

The shape of a true bell is derived from two basic forms: the cup and the hollow sphere. The cup form or "open" bell is more common and is used in a great variety of profiles for almost all kinds of Western European tower bells. The sides of this form flare out from the top slightly for two-thirds of their length and then more rapidly towards the bottom. [...] The shape of a common open bell consists of a head or "vertex," shoulders, waist, the "sound bow," the "lip" or rim as the lower edge and the open "mouth." With the increase in flare at the outside there is also an increase of the thickness of the bell's wall. The maximum thickness occur near the rim where the clapper or hammer strikes the bell, called the sound bow. 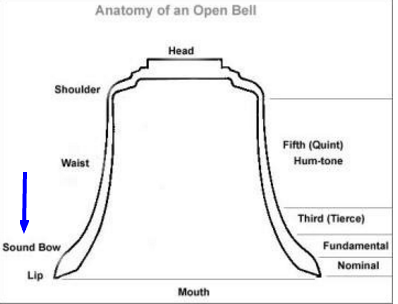 The Harvard Dictionary of Music 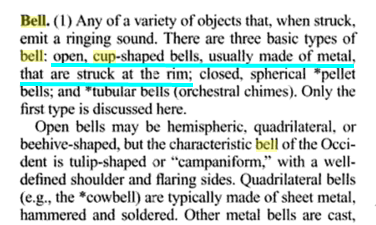 In the case of a stringed instrument (piano, guitar, etc.), most of the sound we hear doesn't come directly from the string. In those contexts, we might refer to the component which is firmly attached to the vibrating string (and which makes the most noise) as a sound(ing) board.

But as @John comments above, with something like a bell it's almost meaningless to seek a term to identify the main body of the bell excluding the [optional] clapper. It's just the "bell".

Having said that, if you really need to explicitly identify that "main body of a bell" (and you don't like "main body"), the first alternative that occurs to me is...

the bell shell, or the shell of the bell

Note that this is a somewhat "creative" usage. There are only a couple of hits in Google Books for each of the above, so they're obviously not "established" usages that you might find in a dictionary. But native speakers would easily understand them even on first encounter.

8
Single word request for rings formation on water
2
Any word/phrase for 'what one says' and 'actually does'?
1
Name for a submitted form
1
What is the English name for the “sign” that is put between words to add another word?
29
Verb for “just opening a bit” a window or door
0
What is the name of the profession that makes mattresses?
1
What is the name of the person that consults?
0
What do you call the little rings that hold the cord in a fishing rod?
0
The bus or car part that we stand on name