(Down the road) vs. (Around the corner)

A. I'm hungry.
B. You should eat something! There's a restaurant down the road.

A: The streets are noisy. But just around the corner, you can find quiet places.

The previous situations contain those two expressions (down the road) & (around the corner), which mean (very near).

Generally speaking, could they be used interchangeably (Are they equally the same)?

No, they are not interchangable. They may imply that the pointed place is near but each of them indicates a different specific direction that you have to take in order to arrive there.

down the road implies that you maintain your direction, the line in which you move.

@J.R has pointed that up the road and down the road may be interchangeable. Take a look here for more information about that: Why do you always "go down the street".

around the corner implies that you have to turn in a corner, you have to change the direction.

According to Cambridge Dictionary

Usually down the road and around the corner mean something a little different, but it's possible they could be used interchangeably, depending on the layout of the roads.

We can take a look at this little town and I'll explain. 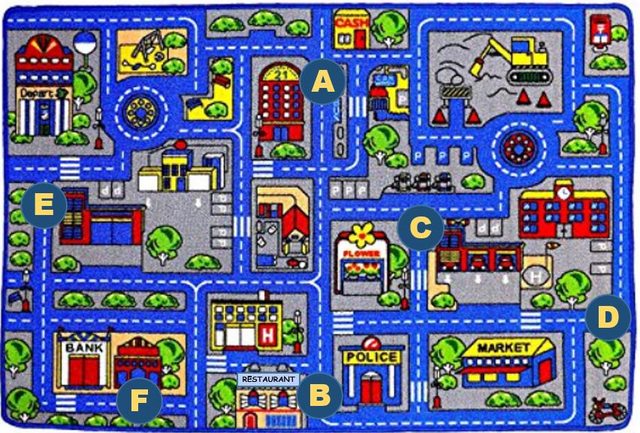 Let's say you are going from A to B. B is down the road from A (that is, they are on the same street), so I might tell you:

You look hungry. Just go down the road, and you'll see a restaurant on your right.

However, if you were going from C to D, C and D are not on the same street. So one way I might give you directions is:

There's a park around the corner. Head down this road and take your first left. You'll see the park on your right.

The one place where the two expressions might be used interchangeably is when a road makes a sharp, near-90° turn, but it's still the same road. So, for example, if we were at E, and I was giving you directions to F, then I might say either one of these:

Just keep going down the road; you'll see the red building next to the bank.

Just keep driving until you go around the corner; you'll see the red building next to the bank.

Either of those would be accurate, although I might combine the two to make myself more clear:

Just keep going down the road until it makes a sharp left turn. Soon after you go around the corner, you should see the red building next to the bank.

Not the answer you're looking for? Browse other questions tagged meaning-in-context word-choice word-difference .