So I had to check my friend's homework, but I myself don't even know the answers. For instance:

I am leaning towards "they have both got" (#1), but I cannot rationalize why, or why the other option would be bad.

Which is correct, and why?

Edit: Her teacher wasn't exactly of much help when she said that it is just the way it is. The answers are shown below.

A copy of her homework is below: 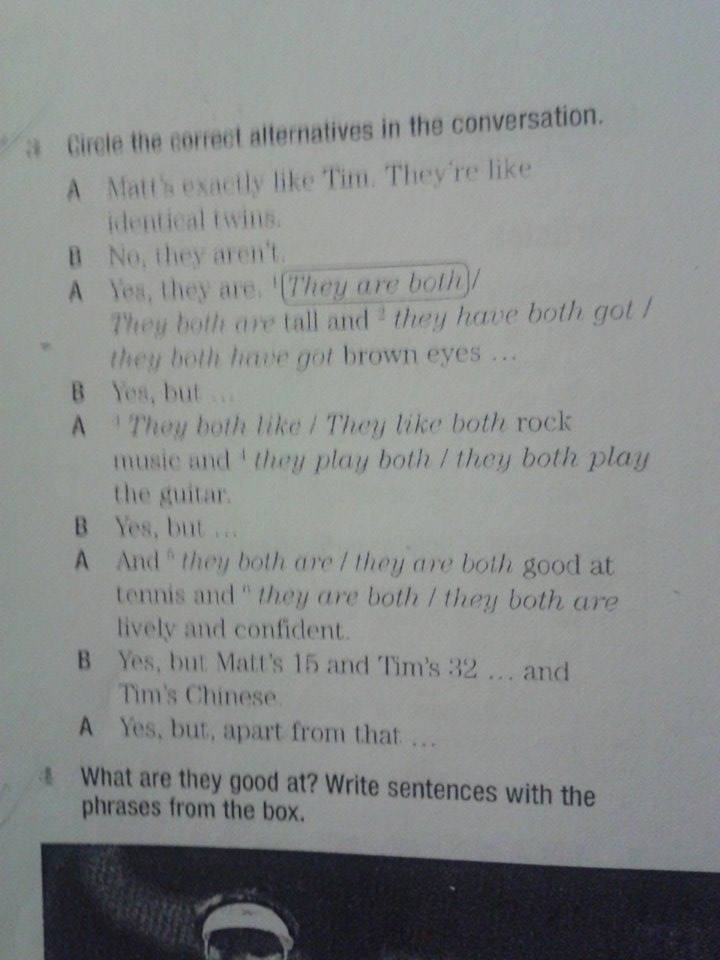 A copy of the answers (provided by her teacher): 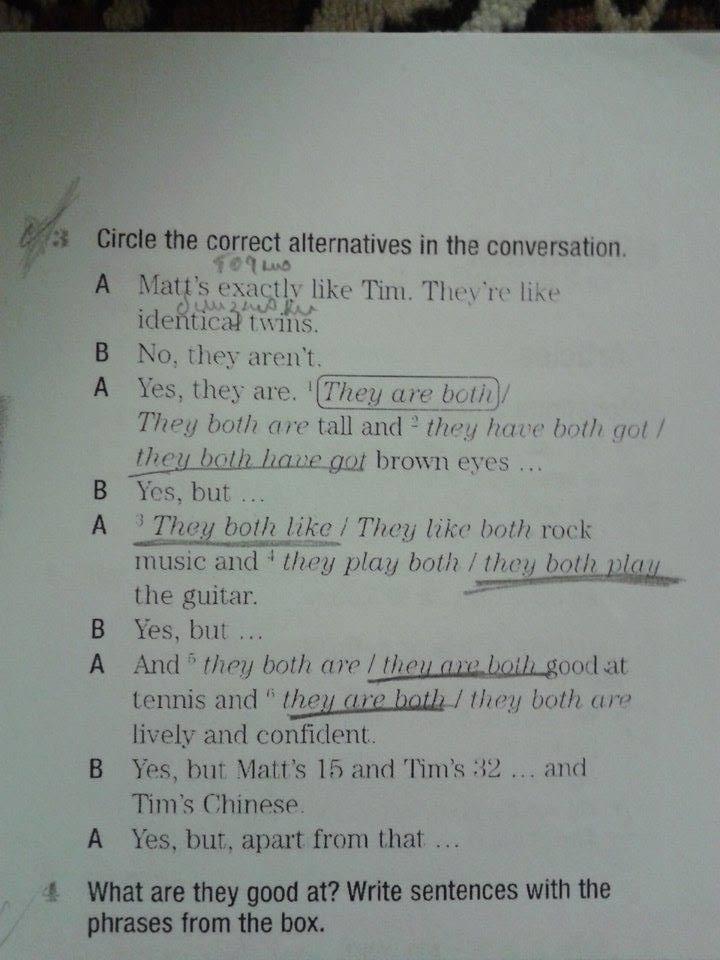 It so happens that four questions have no wrong answer, and only two questions have a right/wrong pair as answers. (Aside: I like that kind of homework!)

CAVEAT: Some of the grammar info that I'm presenting in this post might be intentionally--or unintentionally--over simplified. Hopefully there won't be any egregious errors. (I'm sure I'll get dinged if there are.)

Let's first do a little grammar review, and then later we'll look at her homework.

There are two main uses for the word "both":

Auxiliary verb: An auxiliary verb can usually be identified by verifying that it can participate in subject-auxiliary (verb) inversion. For example:

Sometimes it might be unclear as to whether the word "both" is functioning as a quantificational adjunct or as a marker of coordination. Consider this possible ambiguous example:

The two different interpretations can be seen when it is compared against:

That is: ditto as given for question #1 above, except that the auxiliary verb here is the verb "have".

Example #3.b is ungrammatical. The reason it is bad is because the word "both" is functioning as a quantificational adjunct, but it is located after a transitive lexical verb ("like") and before its object.

Example #4.a is ungrammatical. The reason it is bad is because the word "both" is functioning as a quantificational adjunct, but it is located after a transitive lexical verb ("play") and before its object.

That is: ditto as given for question #1 above.

The above two examples are grammatical, but the first of the pair is ambiguous as to how it could be interpreted.

Example #6.a is grammatical because of one of the following reasons:

The determinatives both and either function in the structure of NPs or of coordinations:

A comparable difference in position between auxiliaries and lexical verbs is found with certain determinatives, such as all, both, each (…), that are semantically associated with the subject:

In the [i ] versions all belongs syntactically and semantically in the subject: it functions within the NP all the players and it quantifies over players. Such items can be positioned outside the NP, and the [ii ] versions show all in pre-verbal position. If the verb is an auxiliary, it can follow the verb, as in [iii.b ]. But it cannot follow a lexical verb, as is evident from the ungrammaticality of [iii.a ].

One use of fused-head partitives that merits separate mention here is that where they function as quantificational adjunct in clause structure:

The quantificational adjuncts serve to quantify the subject. Example [i ] is thus equivalent to Both her parents felt she had been exploited and [ii ] to None of them had intended to cause so much ill will. Universal all, both, and each can occur as implicit partitives, while the set of determinatives found in explicit partitives is considerably larger: these three together with existential some, any, none, cardinal numerals, multal many and much, paucal few, a few, and several.

In this construction the underlined expressions (italicized bold expressions, F.E.) are quantificational adjuncts functioning in clause structure. This is evident from the fact that when the verb is an auxiliary they preferentially follow rather than precede it, as in the [b ] examples.

Some related examples from the 1998 SPE. An example is grammatical if it is unmarked (most of the examples below are grammatical).

NOTE: The 2002 CGEL is the 2002 reference grammar by Huddleston and Pullum (et al.), The Cambridge Grammar of the English Language.

NOTE: The 1998 SPE is the 1998 textbook by James D. McCawley, The Syntactic Phenomena of English, 2nd edition, paperback.

The question didn't carry the british-english when I replied, so be aware that this answer explains the American English style.

As the comments say, both alternatives are worse than "they both have".

However, in context there is a clear advantage to one of them for reasons of parallel construction.

The assignment appears to have precircled "they are both (tall)", thus the complete sentence would be

However, the pre-chosen phrase is also bad style1, it should be

Contrast this with correct use of both following the verb

In this example it modifies the predicate or object, not the subject. And that will be the natural line of thought when hearing a sentence in which the modifier is placed after the verb.

but this is usable whether "they" are two or many, because "both" isn't modifying "they".

The other choice is similar:

"Both" still doesn't modify the subject. To make this clearer, consider the awkward but grammatically correct sentence (of questionable truth)

If you wanted it to obviously modify the subject, then

At best the preselected word order is ambiguous and confusing (proof follows).

Thanks to F.E. for bringing the correct terminology into the discussion. To recap the issue of ambiguity, there are three functions which "both" can potentially perform:

All examples in the question desire "both" to be interpreted as the first case, a quantification adjunct. But none of the offered options do so unambiguously.

If "both" is placed before the verb, it can function as either 1 or 2.

If "both" is placed after the verb, it can function as either 1 or 3.

In common usage, it shouldn't appear in either location. This provides maximum clarity.

However, this doesn't provide emphasis. For that, including "both" can be useful.

In these examples, only the first leaves the meaning of the term "both" momentarily ambiguous, and its function becomes clear to the reader ("fixed") very early and actively. In the third example, "both" is fixed as soon as it appears, because it doesn't agree with the subject. For the second example, "both" would be unclear, even after the end of the sentence, so the emphasis on coordination has been provided in a different way.

1 Note that I am not saying the constructs offered by the exercise are outright incorrect from a grammatical perspective. But they slow down comprehension2, compared to sentences starting with the unambiguous clause "Both of them".

2 For a discussion of ambiguity and its effect on comprehension time and effort, one should consult the cognitive science literature, such as Gerry Altman "Ambiguity in sentence processing" (download with no paywall)

Language learners would do well to learn the practical aspects of clear communication in addition to the borderline cases permissible according to grammar yet unclear.

This is, frankly, a question whose answer can only be found in the nuances of the grammatical constructs your teacher is teaching you to use.

In general though (and although you did tag with british-english, I'm going to go ahead and talk about American English), both constructions make sense to me, as a native speaker, and are for the most part, interchangeable. Here's an Ngram that compares the popularity of "they both have" and "they have both" - and it's actually an interesting trend.

FWIW, I'm also inclined to note that for the purposes of emphasis in speech, I might prefer to say "they both have" to emphasize that "they" refers to a specific pair of people, as opposed to "they have both..."

Not the answer you're looking for? Browse other questions tagged british-english coordination adjuncts .