"Early" vs "earlier" this morning / this month

While I was reading some various text below two things came up over and over like them in a rule.

If "early" and "earlier" were exchanged, would those sentences still be correct, and are the meanings the same as before?

Part 1 of the question

While I was reading some various text, below two things came up over and over like them in a rule.

Early this morning Earlier this month

First of all let us examine the claim quantitatively. 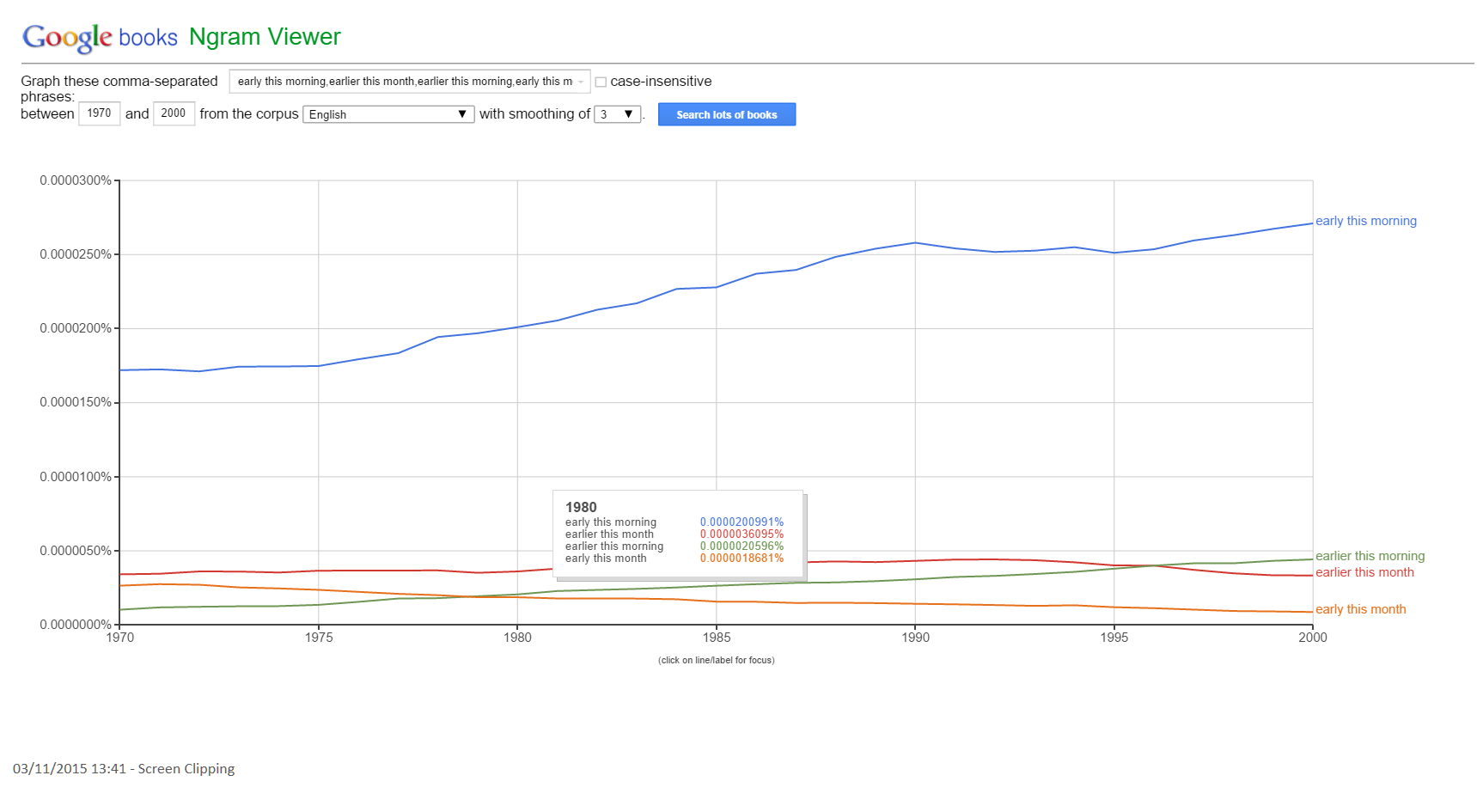 By examining the graph there does seem to be some validity to the 'rule'.

'earlier this month' appears roughly 4 times as often as 'early this month'.

A thoroughly researched answer would take many hours and involve the analysis of a great deal of text. Instead I'll guess.

I believe that the explanation simply relates to what we are most likely to talk about.

If I speak to someone during the day about my morning exploits, I may be talking (a) during the morning (b) during the afternoon (c) during the evening or (e) at night.

Only in the first case does it usually make sense to talk about things that happened 'earlier this morning'. In the other cases we would be more likely to discuss what happened 'early this morning'. Thus there are simply more occasions during a day when the latter is appropriate. (Note that this explanation relates to Hot Licks' answer and suffers from some of the same problems)

In this case a month is not divided into arbitrary categories such as month-morning, month-afternoon etc. So when you are in a month, any story you relate refers to 'earlier'.

Note I do not claim this as an authoritative answer. It is simply a hypothesis.

Part 2 of the question

if "early" and "earlier" were exchanged, are those still correct and are the meanings same as before?

The simple answer is that you can exchange the words and the phrases remain grammatically correct.

However English is a context dependent language so it is possible that a particular context could cause the fragments to be equivalent.

I am an AmE speaker and I have heard people use the expressions interchangeably to mean the same thing. The meaning is that something happened earlier in the day or month and tends to be idiomatic. So unfortunately, when someone says "Early this morning, I took the train to work." They could mean the train left at 5am or just mean that they took a train in the morning. Same with earlier this morning. The context, though is important, so if the discussion centered around the sequence of events in the morning a speaker is more likely to not be idiomatic and use "earlier."

Here is an idiomatic use example:

"What did you do today?" "Well, let's see, early / earlier this morning, I went to the gym and tried out that new racquet I got."

Here is a precise use example: "You look happy. What did you do today?" "Around lunch, I got a call from Stu. We got the contract from NASA. Earlier this morning I had a good workout in the pool, so yeah, I guess I'm happy."

You asked if one can exchange the words and retain the meaning. Technically, no, however as I discussed above, people (AmE speakers I have heard) will exchange them. It would be interesting to hear from other AmE speakers. I recall this being used in the Southern US.

"Early this morning" refers to a time in the early morning (which of course is a relative concept, depending on your culture and habits). "Now" may be the morning, afternoon, or evening.

"Earlier this morning" refers to a time prior to "now" (which is presumably morning or early afternoon) but which was after midnight or maybe 3AM (depending on culture and habits).

(Note that, per Chasly's comment, the above assumes there is no other immediate context that would tend to define/constrain "earlier", as in "Early this morning I had my breakfast and even earlier this morning I had a shower." In this latter case "earlier" is understood to have it's "usual" meaning relative to the "early" clause in the context.)

As Nathanial says in a comment above, "earlier" only works when there is some context to answer "earlier than what?". If someone comes up to you and says "Earlier this morning I did X", without any prior discussion or other source of context, one can reasonably assume that the reference point is "now". If they first discuss something they did an hour ago, the reference point may well be "now" minus one hour (though this is not 100% guaranteed).

But the point is that it does "make sense" -- it's not a set of arbitrary rules you need to memorize, but rather you just need to analyze the logic, context included. (Though, as with everything having to do with the English language, one needs to be wary of being too rigid and strict in the application of "logic".)

1
Meaning of Sentence with unusual construction?
0
Meaning and use of two sentences
2
What's the meaning of "shred thoughts"?
0
a sharp challenge to/for
0
What does this text from Bernard Shaw's book mean?
0
the meaning of "as it seemed to him at times"?
0
What does this mean?: "So monstrous was I then ready to pronounce it that the child should be under an interdict."
1
Which meaning of "naturally" fits in this context?
0
Question about "When it comes to all things"